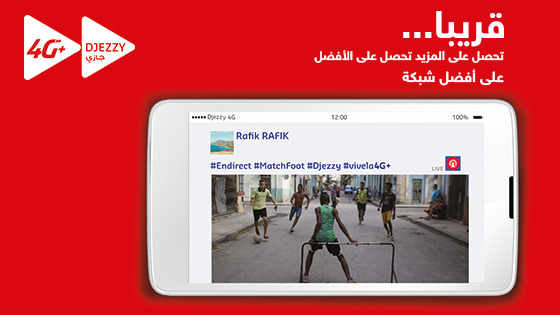 Djezzy, a subsidiary of Global Telecom, aims to launch fourth generation wireless services (4G) in Algeria this autumn, during the last quarter of 2016, according to an investment report by Global Telecom.

The company explained that the 4G network is considered a major step towards supporting Djezzy’s situation after revenues declined during the second quarter (Q2) of 2016 at an annual rate of 15%, dropping to $27.4m compared to $32.2m in Q2 of 2015.

This plan comes after Global Telecom merged its Pakistani subsidiary Mobilink with Warid Telecom in July, which will result in the number of subscribers to this new venture reaching 50 million users.

Global Telecom is paying special attention to growing mobile data revenues. This was clear in the results of Q2 this year, which showed a growth in mobile data revenues at an annual rate of 56%. This reflects the company’s shift from depending on traditional voice and message services to digital services.