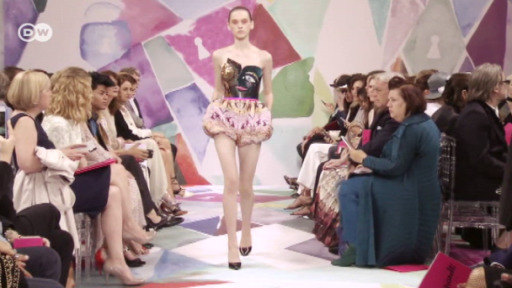 The House of Dior has named Maria Grazia Chiuri as its new creative director. The French fashion house hopes to replicate the sales success engineered by Chiuri for Italian label Valentino.
Italian Maria Grazia Chiuri will be the first female creative director of Christian Dior, the famed French fashion house announced on Friday. This means Chiuri will leave her co-director position at Italian designer Valentino and end her artistic collaboration with Pierpaolo Piccioli.

Chiuri and Piccioli took over the helm of Valentino from its founder Valentino Garavani in 2008 but the pair have worked together for over twenty years. Together they maintained the label’s high reputation but also turned it into one of the industry’s most profitable and fastest growing brands.

According to industry insiders, it was this aspect of her career that gave Chiuri the biggest boost as Dior struggles with flagging sales. Christian Dior is controlled by French billionaire Bernard Arnault, who also controls luxury conglomerate LVMH Moët Hennessy Louis Vuitton SE.

“When you listen to a woman talk about a woman, whether it is her body or her lifestyle, her work, the way she travels, what she needs, it is not conceptual,” said Sidney Toledano, CEO of Dior. “It is practical. Maria Grazia is very practical: very straightforward, very clear, and she has no fear.”

“It’s very important to have the eyes of a woman designing for women” he added.

She said her appointment was a “great honor” but also a “tremendous responsiblity,” to be the first woman to lead a brand “so deeply rooted in the pure expression of femininity.”

“I cannot wait to express my own vision,”

Dior has been without a creative director since the unexpected departure of Belgian designer Raf Simons last October. He expressed a desire to focus on his own label after three and a half years at the French house. Simons, both at Dior and his previous position for Jil Sander, has repeatedly come under fire for refusing to use models of color in his catwalk shows.

Founded by eponymous designer Christian Dior in 1946, the house became famous for its “New Look” suits and dresses which pinched in at the waist and employed voluminous fabric – shocking for a post-war France used to rationing. Dior’s work is also credited with re-establishing Paris as the capital of fashion after World War II.

In it’s seventy year history of producing womenswear, every creative director has been male.

The reaction to Dior’s announcement on Twitter was overwhelmingly positive.

Chiuri does not have her own label and she will have more responsibility for other aspects of the brand than her predecessors. Not only will she design ready-to-wear and haute couture collections but will also be involved in advertising and store design, as well as the shoe and handbag branches of the brand.

Her first public foray for Dior will be a ready-to-wear collection to be presented at Paris fashion week in September.

Christian Louboutin: For the love of shoes

Breakfast, fun and get your hair done