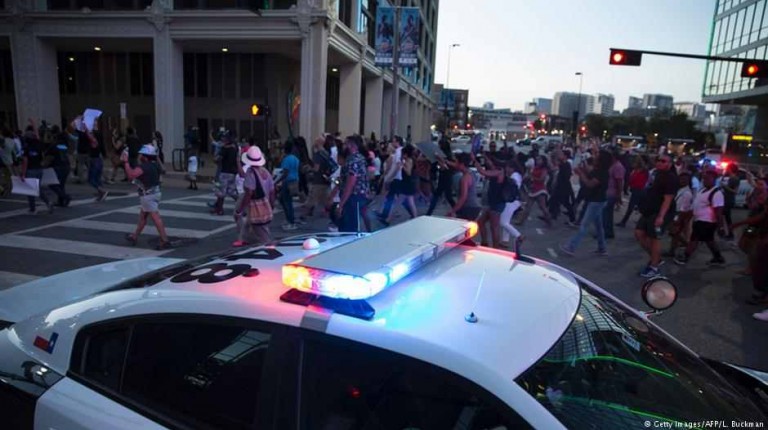 Dallas Police Department (DPD) Chief David Brown said Friday that a man has barricaded himself in a downtown garage in the US city of Dallas after multiple snipers shot at law enforcement agents during a protest rally against police brutality.

He noted that police have exchanged fire with the man, and that he is “not being cooperative” with authorities.

The assailant told police that “the end is coming,” claiming there are bombs strewn throughout the garage and other places in downtown, Brown said, adding that he could not verify the threats.

A loud blast was heard near the garage, according to reporters at the scene.

“Near El Centro, where suspect is believed to be. Seconds ago, DPD told us to move. Then, a loud boom and what sounded like shattering glass,” said Dallas Morning News’ Robert Wilonsky.

In Warsaw, US President Barack Obama said he has been informed about the situation in Dallas, saying the federal government will provide assistance to local authorities.

“There is no possible justification for these kinds of attacks or any kind of violence against law enforcement … Justice will be done,” Obama said.

“When people are armed with powerful weapons, it makes attacks like this more deadly,” he added.

DPD Major Max Geron said authorities have launched an operation to seek out possible explosives in downtown. “There are extensive sweeps of downtown for explosives underway. This will take quite a while,” Geron said.

At least three suspects, including a woman, have been detained and are being interviewed, Brown said. Authorities have been unable to determine the motive behind the attack, he added.

“We still don’t have a complete comfort level that we have all the suspects. We will continue a very, very rigorous investigation and search of downtown … until we are satisfied that all suspects are captured,” Brown said.

Police did not provide any identifying information on the suspects.

Late Thursday evening, the police chief said in a statement that two snipers fired on a number of officers as the protest progressed through downtown Dallas late Thursday night.

“Three officers are deceased, two are in surgery and three are in critical condition,” Brown said in a statement.

Police later confirmed two others had been killed, bringing the total death toll to five. At least one civilian was wounded in the gunfire.

A photograph of a man carrying an assault rifle during the protest was wanted for questioning. “The person of interest whose picture has been circulated just turned himself in,” Dallas police said in a statement.

However, the man told local news that he was mistakenly identified as a suspect, adding that he was legally carrying a firearm. Texas is an open-carry state, which allows individuals to carry certain guns as long as they are visible.

He was later released by police, according to local media.

Meanwhile, police pursued three other suspects after an officer witnessed a person leave the scene of the shooting with a suspicious bag.

“A DPD officer observed an individual carrying a camouflaged bag, walking quickly down Lamar St. The individual threw the bag in the back of a black Mercedes and the Mercedes sped off at a high rate of speed,” the police department said.

“Police are questioning both occupants of the vehicle,” it added.

“Another alleged suspect was in a shootout with Dallas SWAT officers. That suspect is also in custody. A suspicious package was discovered near this suspect’s location. The package is being secured by DPD bomb squad,” the statement added.

Texas Governor Greg Abbott said he had directed the head of the state’s Department of Public Safety to offer “whatever assistance the City of Dallas needs at this time.”

The Dallas shooting comes amid planned rallies in several US cities after two black men were shot dead by police officers in Minnesota and Louisiana this week.

Philando Castile, 32, was shot during a traffic stop near Minneapolis, Minnesota, on Wednesday. One day earlier, police gunned down 37-year-old Alton Sterling outside a shop in Baton Rouge, Louisiana.

Dallas is the latest battlefield in the United States