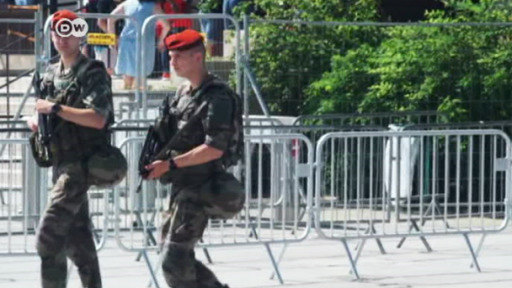 Security forces have detonated a controlled explosive near the Stade de France in Paris. A police spokesperson said they used an explosive to force entry into a suspicious car discovered in a prohibited zone.
French police on Sunday used a controlled explosive to force entry into a vehicle parked in a prohibited zone near the Stade de France, hours ahead of a European Championship match between France and Iceland.

Security forces were alerted to the suspicious vehicle, which was discovered in a no-parking zone.

However, police said they found nothing suspicious inside in the vehicle after performing a thorough inspection of its contents.

“These checks happen regularly in Paris,” said a police spokeswoman. “They did not blow up the entire car.”

France has increased security across the country for the European Championships after a series of attacks in the capital claimed the lives of 130 people in November.

The Stade de France was targeted during the November attacks, which were claimed by the “Islamic State” militant group.

Meanwhile, both teams prepared for the much-anticipated match. Iceland is unbeaten in 12 out of its last 14 competitive matches.

Opinion: Hollande’s government is also a victim of the attack in Nice

France looking to avoid another Icelandic shock in last eight

Tour de France: Who will go the distance?