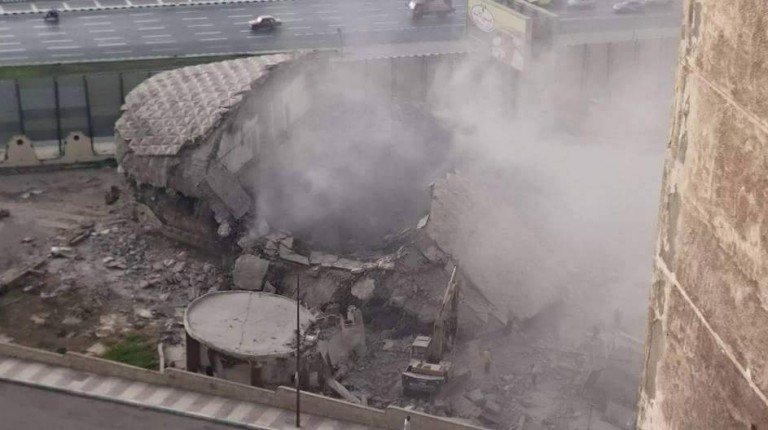 After hundreds of legendary live shows, famous plays, and international actors performing across its stage, Al-Salam theatre in Alexandria was demolished on Saturday.

The unique, circle-shaped theatre was one of the oldest theatres located in Sidi Gaber, eastern Alexandria. For over 62 years, it was known for presenting Egypt’s most famous plays, and holds irreplaceable memories for many generations that grew up watching Adel Imam, Abdel Moneim Madbouly, and Foad El-Mohandes’ live performances.

On Saturday morning, people woke up to heart-breaking pictures of the Al-Salam theatre after it was partially demolished. Though the theatre had been closed for a few years, people still considered it one of Alexandria’s most cherished landmarks.

“The theatre is being demolished because it has major structural problems that affect people’s safety,” said Mohamed Seda, head of the National Organisation for Urban Harmony.

The decision to bulldoze the theatre was made by the military, and due to its  authority over the building, preventing the process was impossible.

“The theatre is one of the armed forces’ properties; therefore, we have no authority to stop the bulldozing process, even if we want to,” said Mohammed El-Banan, spokesperson for the Cultural Development Fund. “Over the years, the theatre was rented from the military to those who wanted to perform in it, without any interference from the Ministry of Culture.”

Despite the fact that the place was over 60 years old, it was not considered one of Egypt’s heritage buildings.

“Al-Salam theatre is not registered with the government as an antiquity, and it doesn’t comply with antiquity standards, so we can’t do anything regarding its destruction,” Seda said.

According to El-Banan, the theatre’s design was  unique and Egypt does not have many similar buildings, but nothing could be done to avoid such a waste.

The pictures were met with anger and pain. People expressed their acrimony towards wasting Alexandria’s legacy “to make fancy modern  skyscrapers that have no soul or history”.

“Goodbye, my best memories and the best people I have ever met, “ said Egypt poet Ayman Bahgat Amar in a Facebook post. “This theatre was once filled with people that sat over each other, and its walls were shaking with laughter and clapping. We have [now] turned into people who live a fake life.”

“Who will pay for the wasted history, the cultural enrichment, and the legacy that this place was all about?”  another person commented.

The demolishing of Al-Salam theatre is one of many similar decisions made by the state.  After most of Alexandria’s old mansions and villas were destroyed to make room for residential towers, people were even more shocked when the state decided to demolish a mansion that dated back to King Farouk’s era. A seaside resort was built instead.

Backstage at the Bolshoi Theatre