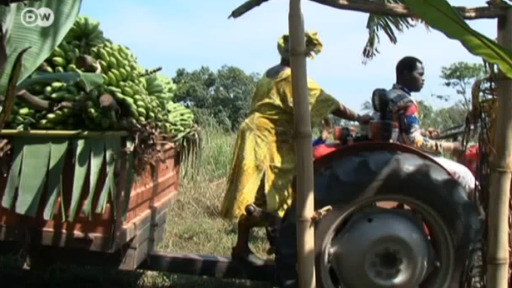 Africa’s elite is meeting in Rwanda’s capital Kigali for the World Economic Forum on Africa. It is a good place to examine what economic success looks like because Rwanda is practically top of the class.
Somehow, his life still seems like a small miracle to him. Kevin Kabatsi is only 22 years old and sitting in this beautiful office with a view of one of the many green hills of Kigali. He manages a private investment fund, which invests in small and medium enterprises – coffee producers, sugar traders or technology companies. The investments range from $15,000 to $50,000.

Kabatsi grew up in South Africa; his family fled from the genocide in Rwanda that cost almost a million people their lives within just a few weeks.

“In 1994 the country was basically reduced to zero,” he says, looking pensive. “Many people were either dead or in exile. We had to rebuild our country and also rebuild trust.”

Kabatsi would have never dreamed that the Rwanda of today would be one of the fastest growing economies in Africa with an excellent economic climate, but he hoped it would. That is why he returned to his country of birth two years ago. For him, it is a land of a thousand opportunities. “Can you imagine: It only takes a day to start your company if you have the papers with you,” he says proudly.

In its current country report, the World Bank expects growth of almost 7 percent for Rwanda, more than most other African countries. The World Economic Forum in Geneva calls Rwanda “a top performer in improving the business environment and one of the continent’s most competitive environments.”

That is why the location for this year’s World Economic Forum on Africa was chosen deliberately and Rwanda is using the opportunity. The 1200 delegates are greeted at the airport by a big tent with coffee, tea and hot chocolate. All three are export products made in Rwanda. Along the clean streets, there are large signs: “Rwanda the land of 1000 hills welcomes you.”

“You can see how the general public can interact with high level people with whom they were not able to interact before,” says Ephraim Rwamwenge, excitedly. “That is amazing. And just look at the tourism. It is very hard to get a room now and think about the travel. Many people are coming via the local carrier and everybody is spending money. It helps boost the economy.” The 27-year old is part of the network of the so-called Global Shapers of the World Economic Forum and he has dozens of appointments in his calendar for the next few days. He is using the opportunity to make new contacts outside of his home country. Many African entrepreneurs are here, but politicians and representatives from NGOs as well.

It is about the digital future of Africa but also about infrastructure projects, about sustainable management, about energy and about the demographic challenges. There are estimates that by 2050, Africa’s population may have grown to 2.5 billion people.

The demographic challenges can be felt in Rwanda as well. The population is extraordinarily young, which is also a result of the genocide.

The Rwanda National Employment Policy targets the creation of 200,000 jobs each year to meet the employment need of the labor force. According to the World Bank, “Rwanda’s working age population is growing rapidly, and creating sufficient productive jobs for this expanding labor force will be one of the defining challenges for Rwanda over the coming decade.”

Because of that, the Rwandan government under president Kagame is betting on expanding the private sector. This is where many new jobs could be created. The country’s geographic location near Tanzania, Uganda and Kenya is also a bonus. That is why the next few days will also be a small promotional event for the country with the thousand hills.

A lot of money and many promises

Can we make our cities more sustainable?