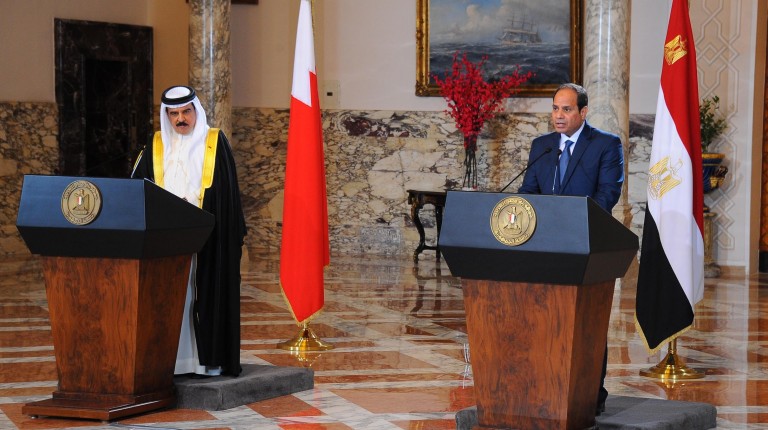 During King Al-Khalifa’s visit to Cairo, Al-Sisi affirmed that Egypt will not allow any attempts to threaten Arab countries’ national security, adding that the stability of the Gulf reflects the stability of Egypt, according to a statement released by the presidency.

The Bahraini king said Egypt is the keystone of Arab stability, putting an emphasis on “unifying the Arab stance against any attempt to interfere in the Arab countries’ internal affairs”.

Al-Khalifa affirmed Bahrain’s support for the Egyptian initiative to launch a United Arab Force. Egypt previously called for the formation of a United Arab Force, for which the Arab Chiefs of Staff agreed on a protocol in May 2015.

The two discussed international counter-terrorism efforts and the current affairs in the region.

Bahrain has accused Iran of fuelling unrest and aiding Shia extremists who have been involved in attacks on the Bahraini police force. Iran, in turn, has denounced these accusations.

Minister of Foreign Affairs Sameh Shoukry said on Tuesday, during a press conference with his Bahraini counterpart Khaled Bin Ahmed Al-Kahlifa, that Egypt supports the unity and stability of the Kingdom of Bahrain and stands against any attempt to interfere in Bahrain’s internal affairs.

Shoukry added Egyptian relations with Iran are still severed. “We call on Iran to change its policy towards the Gulf, in particular towards Bahrain, and to stop interfering in the internal situations of Arab countries,” Shoukry said at the press conference.

The Bahraini foreign minister asked Iran to change its policy towards the Gulf and to cease its attempts to dominate the region. “Iran is our neighbour but we have problems in our relations,” said the Bahraini minister.

During the visit, Egypt and Bahrain signed 19 agreements in several fields, including health and agriculture.