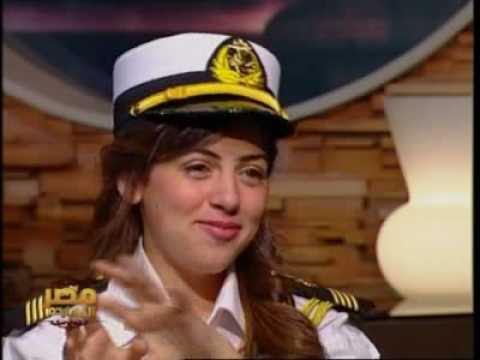 Dreaming of open horizons of water and playing with miniature boats might have been the way young Marwa El-Slehdar spent her childhood nights, aspiring for a major that only men dominated.

El-Slehdar who is the first and only shipmaster in Egypt added a new milestone to her outstanding resume last Thursday on the inauguration of the second Suez Canal. The shipmaster took place in the morning ceremony as second naval officer of “Aida 4”.

El-Selhdar spoke to Al-Ahram newspaper prior the ceremony, as she expressed her great honour to be part of such event that would receive international interest; stating that even though participating in this ceremony was one of her dreams she never thought it would come true. She suggested the mere existence of a female shipmaster was an act of absolute absurdity a couple of years ago until one special student took the unexpected step.

The major of Technology and Maritime Transport (AAST) in the Arab Academy of Science, Alexandria, never had a public policy against female students. However, none has ever had the courage to defy the public norm and apply for it.

After a female student from Djibouti applied for the department, the promising El-Slehdar refused to keep suppressing her dreams and follow on with her studies in the academy. Without hesitation El-Slehdar applied for the demanding department and went through all the hectic physical tests. For the next couple of years, El-Selhdar was the only female in addition to the foreign student.

At the age of 19 she became the first Arab and Egyptian shipmaster with a degree in marine navigation at AAST.