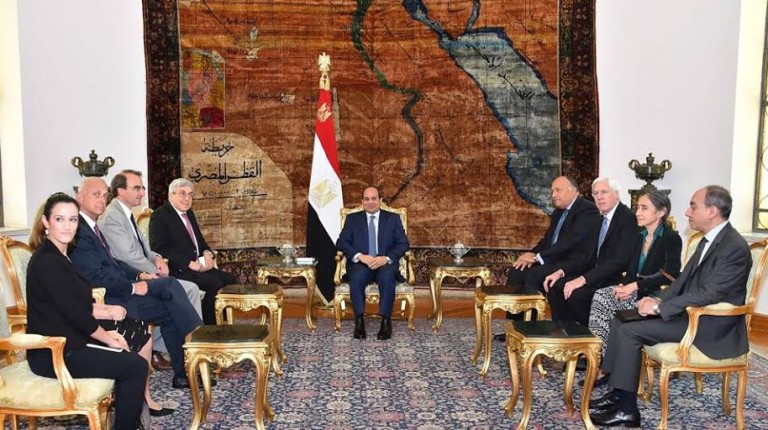 Following a meeting earlier on Monday with Foreign Minister Sameh Shoukry, the delegation of the American Jewish Committee (AJC) was received by President Abdel Fattah Al-Sisi later that day to discuss terrorism as well as the Palestinian cause.

This was followed by Prime Minister Ibrahim Mehleb meeting the delegation on Tuesday, along with the Minister of Housing and the Deputy Foreign Minister for American Affairs.

Al-Sisi stressed during the meeting the importance of tackling the reasons behind terrorism such as “difficult economic and social conditions” in order to provide a better climate for stability and security. He further noted that the situation in Sinai as one of the main problems facing “not only Egypt but the region”.

The delegation also expressed its condolences for the recent attacks in Sinai to Al-Sisi and later to Mehleb, as well as support for the Egyptian war against terrorism. The delegation also praised the “Egyptian achievements on the level of security and stability as well as on the economic level”.

Al-Sisi focused on the security aspects of bilateral cooperation between the US and Egypt. Mehleb, on the other hand, after clarifying the government’s narrative leading up to the ouster of Mohamed Morsi, asked the delegation to “contribute to clarify the facts about the positive situation in Egypt in US media”, stating that there are “many possible areas of bilateral cooperation in the future”.

Further, both Al-Sisi and Mehleb stressed the importance of resolving the Palestine issue. Al-Sisi stated that resolving it “will eliminate one of the most important reasons relied upon by terrorists” to attract people to join their cause.

The AJC delegation, headed by Stanley Bergman, met with Jordanian government representatives earlier this week before travelling to Egypt.