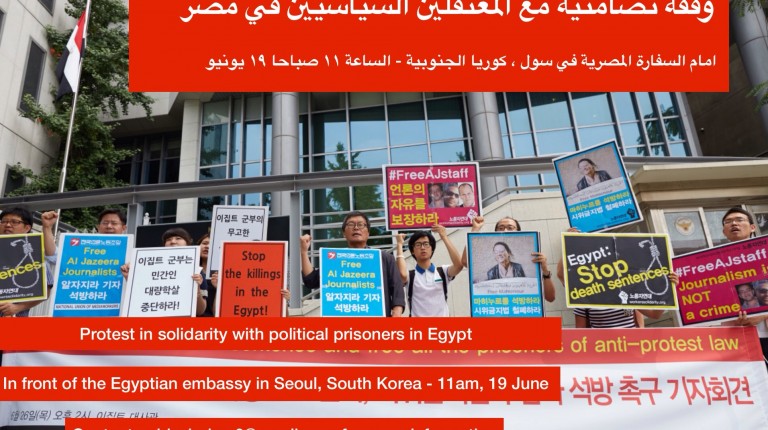 A group of South Korean activists held a protest in front of the Egyptian embassy in Seoul on Friday in solidarity with detainees and to demand an end to disappearances and executions in Egypt.

Jong Kim, one of the protest’s organisers told Daily News Egypt that 20 Koreans and an Egyptian and a Syrian living in South Korea “protested against El-Sisi regime’s repression on political prisoners”.

Following the protest, Korean delegations attempted to reach the Egyptian embassy in order to deliver a letter of protest. “But the Korean police blocked us from reaching the embassy. The police insisted that we should drop all of our signs before getting closer to the embassy. We refused, and had some arguments with the police,” stated Kim.

“The repressive situation in Egypt is beyond anyone’s tolerance. Mass death sentences, harsh sentences against activists and journalists, systematic police torture and depriving prisoners of their rights to stand fair trial,” Kim said.

Kong stated that many of these groups were previously involved in solidarity action with Egypt since 2011. They have also protested in condemnation of the August 2013 security forces’ massacres of protesters in Raba’a Al-Adaweya and Al-Nahda squares, in condemnation of the Protest Law, and in demand of the release of Al Jazeera journalists detained in Egypt’s jails.

“The President of Korea, Park Geun-hye, is supporting [the] Sisi government. Last month, she actually wrote a letter of amity to Sisi saying she wants to solidify mutual cooperation with Sisi,” Kim said. “Clearly we cannot let such terrible position to represent how Koreans feel about the Sisi regime and the Egyptian revolution. We have to make clear that Korean people are against the Sisi regime’s repression.”

“We also condemned the hypocrisy of the leaders of other countries such as US, UK and Korea…We made our voice clear that many Koreans do not consider Sisi as our friend but rather a butcher, an enemy of the     Egyptian revolution,” Kim said.

The protests in Seoul are part of a larger series of protests set to take place in London, Montreal, New York and Beirut on 20 and 21 June in solidarity with Egyptian detainees. The demands include freedom for political prisoners, an end to abuse and torture, an end to executions, free trials for everyone, and an end to the repression of protests.

“If Egyptians turn the tide and achieve a step forward, it will again have huge positive impact on Korea. We and our struggle against respective rulers are all connected, especially in a time of severe economic depression. Therefore, defending the political prisoners in Egypt can also contribute to the struggle in Korea,” Kim said.

Angry US protests continue amid accusations of political hypocrisy