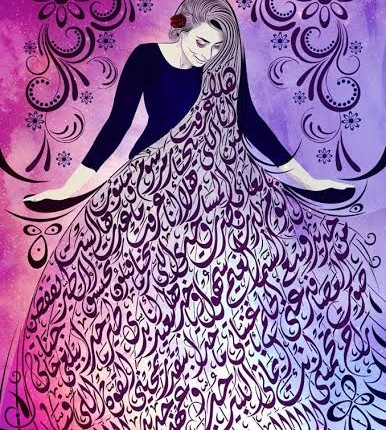 With a pencil between his fingers and an inspiring piece of music playing in the background, artist Hatem Arafa uses his remarkable talent to blend freedom, love, beauty, challenge and affection in one drawing. Arafa mixes Arabic calligraphy’s heritage with modern graphic designs in a professional way.

In a time when most Arabic youth have turned to use foreign languages in their everyday life claiming that it’s more prestigious, the 27-year-old Alexandrian artist decided to launch his project “Drawing with Words”. The project aims to revive the value of Arabic calligraphy in an innovative catchy method.

Between his drawings, you’ll find the remarkable smile of Soaad Hosny surrounded by some quotes from one of Salaah Jaheen’s optimistic poems. You’ll see how the lyrics of a famous song by Mohammed Mounir, “Yehemeny El Ensan w law Maloosh 3enwan” (“I care about the human even if he’s homeless”), can constitute faces for Egyptian people from different backgrounds and social classes. In another drawing, you’ll see Magda El-Romy appear like a butterfly, dancing freely with wings made of Nizar Qabany’s romantic poems. Briefly, in Arafa’s drawings, every line tells a story and conveys a different meaning.

Believing that nothing can stop his dreams or prevent them from coming true, Arafa insisted on pursuing his studies of Arabic calligraphy in one of the biggest Turkish centres for teaching the Islamic history, arts and culture. He also created innovative designs for the covers of over 200 books, in addition to holding regular online workshops for teaching “drawing with words” for young painters and graphic designers.

In an exclusive interview with Daily News Egypt, Arafa revealed some secrets about his beginning, the messages he aims to convey through his artistic works and the inspiration sources of his outstanding drawings.

When did you start your project “Drawing with Words”? And what was the inspiration behind the idea?

My deep passion for change and innovation was the secret behind having such an idea. I get bored very easily and I don’t like entering any field without making sure that it’ll be rich in details. In the beginning, I learnt graphic design and paid special attention to photography, drawing and writing, as well as designing book covers. However, I’ve never found that kind of roominess that Arabic calligraphy gave me in any other art! It includes various fonts such as the Kufi, Thuluth, Naskh, Req’a, Diwany and Farsi and under each type; you’ll find other different sub-types which constitute a long list that I need an entire book to talk about.

I always believe that learning Arabic calligraphy is a kind of addiction, and practicing the ways of drawing each letter gives you unprecedented enjoyment. Once I learn a certain font, I immediately find myself drawn to learning another font, and after that I pay greater attention to their histories and the differences of the eras and the places in which they were used. The Diwany font, for example, has different details in Turkey, Egypt and Iraq. Also, the favourite fonts differ from the Arab Maghreb union countries and Andalusia to Al-Sham. In brief, I found out that studying Arabic calligraphy will allow me to enter a huge world that won’t allow me to feel bored till the end of my life.

When and where did you study Arabic calligraphy? And when did you decide to use it as a main theme in your artistic works?

I was drawn to Arabic calligraphy since I was a little child. When I started working as a graphic designer, I used to insert it as one of the main design elements. At the beginning, I started learning it on my own but I was more interested to learn it in a more professional way. Therefore, I joined some training workshops and I attended some lessons in some of the Arabic calligraphy schools in Cairo and Alexandria. I read many books and watched a lot of teaching videos on the internet. I travelled to Turkey to complete my studies in the  Research Center for Islamic History, Art and Culture (IRCICA). I always wanted to have a remarkable theme for my work, and the mixture of Arabic calligraphy and modern designs allowed me to achieve that uniqueness.

Who inspired you in this process?

The idea of constructing and forming shapes and drawings using Arabic calligraphy is very old, and I’m not the first one to use it. However, I can say that I’m the first one to use the idea of drawing with Arabic calligraphy, blending it with graphics and other unexpected shapes and characters. I was affected by many old calligraphers and also by many foreign artists and painters and their remarkable ways of creating shapes by using letters, drawings and other details.

Most young Arabs turned to foreign languages in their everyday lives, as they believe it’ll make them appear more “classy”. How do you think your drawings can participate in reviving our Arabic language and poetry heritage?

The language is its nation’s tongue and when the nation is defeated, its language will be defeated in turn. Over many years, the foreigner was championed and dominated the economy, science and arts which definitely affected the Arabic entity and destroyed the Arabic citizen’s pride in himself, his history and Islamic identity. Go and ask a child about the main characters that inspire him or influence his life, he will give you a long list of names of foreign cartoon characters and film stars, and it will be a miracle if he gave you a name for one Arabic poet or scientist among them!

My art aims to fight this identity loss and confusion using the Arabic calligraphy that was always one of the most remarkable and affective Arabic arts. I try to convey the message to the people that we, as Arabs, have what can make us feel proud and we can revive our glory when we believe in the civilisation and history our predecessors achieved and try to protect it. Mixing Arabic calligraphy with the simple modern drawings attracts huge numbers of young people and it sometimes urges them to read some verses of a poem which eventually allows them to know more about their mother language with its verbal and formal beauty.

What inspires you with the ideas of your drawings?

Regardless of its visual beauty, the calligraphy must contain an idea hiding between the words whether they are taken from a song, poem, proverb or Quran verses. At the beginning, the meanings of the words attract me and I feel that I want to present them in a way that can portray the feelings and emotions they conveyed to me when I read them for the first time. Then, I start thinking about the overall shape of the drawing trying to add something new every time. I believe the whole process is like writing the lyrics of a song. Usually, the words come first, then the composer thinks of a good melody to it and sometimes the opposite happens. I just feel that I want to create a certain drawing or painting for a certain person, and then I think about the words that can match with the spirit of this drawing. Reading and listening to different songs and genres of music always guarantee having continuous sources of inspiration all the time.

What steps do your drawings go through from the seed of an idea in your mind until it becomes a design on paper? And what are the materials or programmes you use?

I draw everything around me, and everything I wish to see. I draw every scene, meaning, image or blend of colours I miss. Reaching this is a really difficult and complicated process that needs clear organisation. After thinking deeply about the idea, I start organising and arranging every single detail separately. I start writing the words of the sentences, and with the pencil I start drawing the format of the words and keep repeating them many times until I get the perfect shape. Sometimes, I redraw the whole design in the [Adobe] Photoshop or Illustrator computer programmes.

How did you decide to break into the world of designing book covers? And how many covers have you designed until now?

Designing book covers is a part of my work as a graphic designer, as I try to be more comprehensive and create valuable artistic achievements in different fields. Actually, the book field is the closest one to my heart, because I love reading and writing. Until now, I have designed about 200 book covers, but I pay greater attention to the Arabic calligraphy drawings nowadays.

What are the main messages you want to convey through your remarkable artistic works?

Beauty and nothing other than beauty! God put everything around us in this world out of beauty and also described Himself with it. Beauty is the origin of everything, and ugliness is what our hands committed. Man deserves to see beauty that can nourish his soul and mind everywhere, and that’s why I see the Arabic letter important as it combines the beauty of the outer shape, inner content and deeper meaning.  Spreading such art and inserting into our daily life small details such as the names of the stores or streets, the drawings and writings on the clothes, the artistic works hanging on the walls of the houses and shops to the names of the newspapers and magazines. This will make everything our eyes pass by more beautiful, enjoyable and stimulating for the minds and souls.

Comares: A historical investigation into the Fall of Andalusia