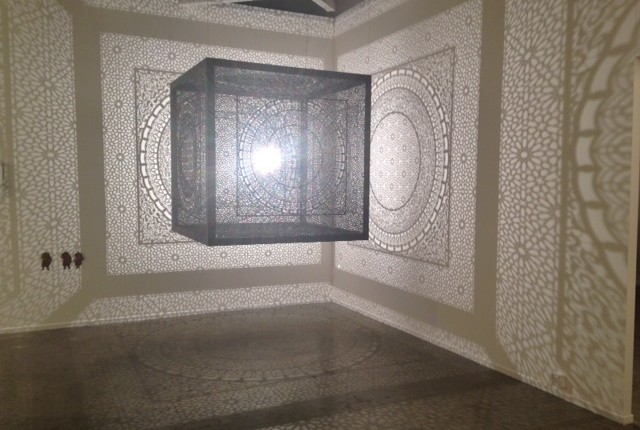 “There is a sense of urgency and relevance to the moment,” said Aleya Hamza, of the Gypsum Gallery from Cairo. “Being here representing Egyptian artists is thrilling.”

Hamza’s eyes focus on people suddenly clustering at the Gypsum exhibition space. The 39-year-old twirls a lock of her classic, curly Egyptian hair and gauges their reaction. She senses something and steps over to do what she came to Dubai to do – sell Egyptian art.

Recent years have seen a surge in the global art market with record sales at auction houses and fairs. The competition is fierce. Since Art Dubai’s inception in 2007, global collectors, museums, gallery owners and art enthusiasts have made it “the world’s largest showcase of Arab artists”, according to director Antonia Carver.

This year, more than 500 artists and 92 galleries from 40 countries were exhibiting sculpture, installation and painting from 18-21 March. Last year’s sales were strong, with mostly individual deals under $100,000.

Connoisseurs and contemporary art critics say Art Dubai has yet to reach the level of the world’s most established markets, like Art Basel, however its emerging market feel provides a special buzz. So does the difference in taste.

Some in the art world critique the Gulf’s conservative nature. Others argue the opposite, and say that what impresses the West is simply very different from what works in the East.

“Don’t be sniffy about oil-rich states, Art Dubai funds the world’s most radical art,” The Guardian newspapers’ art critic, Jonathan Jones, wrote in his review of the show.

Agha, a Pakistani American artist, explained that her work reflects tensions between tradition and modernity. By magnifying the patterns, Sublime Light took the past and dropped it directly into the present. It also stunned audiences.

Outside the halls of Art Dubai featured other highlights. For all of March, the UAE holds a celebration of art, design and culture including Design Days Dubai, the Global Art Forum, the Sharjah Biennial and the Abu Dhabi Festival. Galleries across the country host gala exhibits and events, including a special showing of Zaha Hadid’s exquisite ‘Liquid Glacial Table’ (2012) on loan from the David Gill Galleries in London. Hadid’s clear acrylic and plexi-glass table is a triumph of ripples that disappear into space.

Back inside Art Dubai at the Gypsum Gallery, action always hovered around the Egyptian works on display. Sales were also healthy. “Egyptian art has always been hugely inspirational,” said a project coordinator from Tashkeel, Dubai’s leading art collective, which hosts regional artists and the UAE’s leading young talent.

As Egypt inches toward political stability, its art world follows. Initially, the revolution’s explosion of street art gained fans around the world. The focus is now moving back to Egyptian contemporary art, which considers a broader pallet of expression.

Hamza opened Gypsum in October 2013 in Zamalek (it is now in Garden City). To survive in the art requires moving quickly, and Gypsum exhibitions and artists have already been featured in the New York Times, Harper’s Bazaar Art, Art Daily, Al-Ahram Online and other prominent publications.

“There was a gap in Cairo,” Hamza said, the intensity building in her eyes again. “Nobody was representing contemporary artists and I had a background in curating shows. I also had a major network that would allow me to help the artists. We took a gamble and opened the gallery.”

As Hamza stands back, an older, scholarly-looking Emirati woman leans forward to examine a work by one of the Gypsum Gallery’s leading artists, Basim Magdy. Based in Basel, Switzerland and Cairo, the 38-year-old Magdy won a major prize at last year’s Art Dubai.

This year, his striking print, ‘Fate Brought Us to the Shores of a Lava Lake at Dawn’ (2014) uses a unique experimental photographic process he calls “pickling”, to tweak the film so it better explores the passage of time. The print works wonderfully and hints at the absurdity of life.

“Some of these pieces take time to understand,” Hamza said.

Two or three minutes later, the scholarly-looking Emirati woman stepped away from Magdy’s print and smiled. She nodded at Hamza and disappeared back into the Art Dubai crowd.