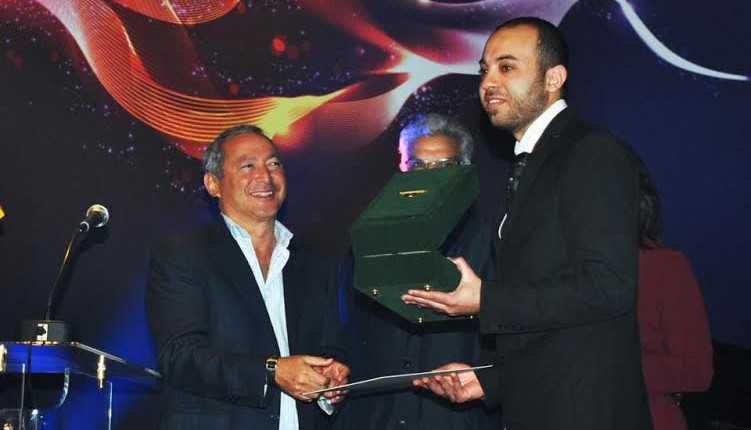 Writing in cafes while listening to classical or Jazz music and drinking coffee are writer Yasser Ahmed’s special rituals that help him find inspiration to add one or two new chapters to the novel he’s writing. Unlike most ordinary people, he can’t concentrate in quiet places, as he usually enjoys writing on the road, on his way to work or home.

Ahmed is a fiction writer, born in 1980. He holds a degree in Computer Science and he’s currently working as a digital marketing head. However, he was always obsessed with writing novels considering it the biggest passion in his life.

In 2012, his first novel “Reverse Course” was released to the Egyptian book market, shedding light on the current situations and problems in Egypt. It tells the story of a man who decided to leave the luxury and welfare of Dubai and return to his homeland, showing the struggles and obstacles that face every young Egyptian man nowadays.

The novel won the 2012 Sawiris Prize in the young authors’ category, and was the subject of first book programme at the French council in Cairo. Four chapters of the novel will also be translated into French language and published in Al-Ahram Hebdo newspaper.

After two years of exhausting research and analysis, Ahmed published his second novel “The Red Monkey Republic” that provided a documentation of the Arab spring revolutions and people’s high expectations that turned into depression and frustration. Although he can be classified as a political novelist, Ahmed is also obsessed with writing about technology, Internet and travel. He also has several technical articles in English posted online focusing on Arabic content.

In his interview with Daily News Egypt, writer Yasser Ahmed revealed some secrets about the preparation of his first two novels, his favorite writers as well as his upcoming novels and literary works.

When did writing start to dominate your life? Does this have anything to do with your childhood?

When I was a child, I used to enjoy listening to stories and repeating it in my own way. I was always in love with the art of telling a story. When I grew up, I became that person who never put the book down even at the dining table. Gradually, I started to feel the words eager to get out so I started writing. After several years of struggling with career and putting my life together just like any other young Egyptian, I kept having the feeling that writing is my best joy. I discovered that the author inside me was my best friend and I actually enjoyed his world. That’s how I became a writer!

How did the idea of your first novel “Reverse Course” come up, and what were the main messages you wanted to convey through it?

I always suffered from the stereotypes we have in our community, and I wanted to write something deep and realistic about our generation. The community always believes that you should be a copy and walk the path they believe in. Once you decide to be who you are, that’s the time you will start facing the fact that it is a reverse course and you are walking in the opposite direction. I wanted to investigate our major question “What do we really wish to be?” The novel is about a young man who decides to go on a journey back to Egypt, and rediscover his life and his home country in a new way.

In this novel, you took readers into a remarkable adventure into the downtown mystical life, why are you so attached to this place? And do you have any special memories there?

Downtown is not only the heart of Cairo, but also the heart of Egypt. All the cultural and political events are on the spot downtown. When I started the novel in 2008, I wrote a whole chapter about Tahrir Square and how the main characters used to spend time staring at the Square, and before I finished the novel the square was the heart of the revolution. In fact, downtown is the only remaining part of the modern Cairo and I wanted to document every part of it in a novel.

After the 25 January Revolution, many young writers tended – intentionally – to include some chapters about the incidents of the revolution in their books and novels to gain sympathy and attraction of the readers which exposed them to waves of criticism. How did you exploit the revolution’s events within the chapters of your first novel? And from which perspective did you analyse it?

I didn’t think of that, but I was actually writing this novel for an entire four years and before I ended it the revolution started. For me, the revolution was a perfect ending for the novel, or let’s say a new start over. The novel is mainly about Cairo before the revolution, and I couldn’t avoid the revolution as fact in the novel. I didn’t analyse the revolution in this novel, but to me it was just a dream for which the main characters were waiting. The revolution itself was an opposite direction for our generation, and we were all hanging in there searching for answers to our questions.

In your second novel, “The Red Monkey Republic”, you introduced a philosophical historical documentary of the Arab Spring revolutions and people’s high expectations that turned into depression and frustration. What are the main objectives behind publishing such novel? And why did you choose such a strange name for it?

Someone had to tell the real story, and there is no better way than putting it into a novel. As you can see the facts were changed by the media and the real history we have seen in the streets are currently shifting into something else! My novel is not about the revolution itself, it is all about the dilemma we had after it and how we lost the dream. The novel is more about the story of broken dreams, not the revolution diaries. I wanted to tell the story of what happened to us after, and how far we’ve been carried away from what we really wanted.  The name is related to the events in the novel and who reads the novel will understand what the meaning of the name is really about.

Your novels tend to carry a political analytical message, haven’t you ever thought about writing a different genre of literature?

I believe that there are enough horror writers whose novels target young adults. I even started to wonder why everyone is writing about horror and suspense. I wonder why young people don’t really like to read about the reality. Even as a matter of change! I believe in writing and not in selling books, because I want my books to live longer and if writers are mainly concerned about best selling shelves I don’t mind. I mainly write to tell the story of our generation. Again it might be a reverse course but that’s what I choose and I will keep writing for those who search for the real questions.

Have you faced any obstacles publishing your first two novels?

I admit that publishers liked my books from the beginning and I consider myself very lucky. The main problem about publishing in Egypt, is that the Egyptian publishers only care about the profits more than the book itself. If you decide to publish in Lebanon, you will face the problem that your book will be expensive for the Egyptian readers. Publishing a book is a huge problem because most of the book stores are only paying attention to the bestselling books as well as the disastrous dilemma of the poor distribution.

Who are your favourite writers?

I love a lot of writers but my favourite ones are Paul Auster, Dostoevsky, Naguib Mahfouz and Mahmoud Darwish

What are your future novels or plans? And have you received any offers for turning your novels into films or plays?

I am currently writing a novel about financial markets and the crazy world we’re living in. The main character moves between countries to discover how the world is changing and the other face of the economy. It is a thrill with a twist of humour. In fact, I never received any offers for turning my novels into films.