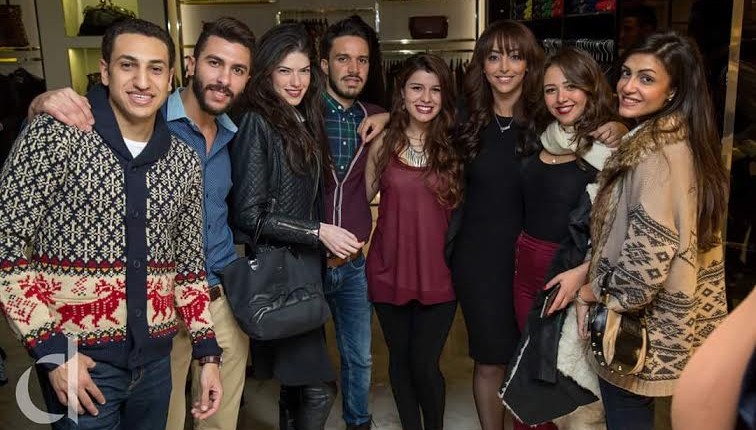 Walking into City Stars’ phase two instantly feels like travelling abroad. From Michael Kors to Victoria’s Secret and Tory Burch, the entire floor is a line-up of the most luxurious brands in the world.

Taking the current economic and political circumstances into consideration can make anyone assume that these stores hardly sell anything. The continuous rise of local designers, who certainly have much lower retail prices, might add to the assumption.

However, Dstore’s first anniversary celebration proved that this is the furthest thing from reality.

Dstore is a multi-brand store that displays all types of fancy designers. The interior décor is classically timeless, while the stacked shelves are the main stars. Cavalli, Burberry, Polo Ralph Lauren and many more brand names are permanent residents at the designer store.

After opening a year ago, the well-known store decided to throw one big trunk show, and invite the whole city.

“We wanted to celebrate being here for a year,” said Jilan El-Rihany, Dstore’s marketing manager.

El-Rihany confidently assured that the rumours of current circumstances negatively affecting the number of selling is nowhere near the truth.

“During last year, and regardless of all the events, the local demand on international brands has increased tremendously along with brand-awareness,” she said.

As the renowned violinist Ahmed Mokhtar started performing on the runway, which was specially designed for that event, the crowd started gathering around in anticipation for the awaited fashion show.

The Azaab sisters, Maisa and Sahar, two of the most famous stylists in Egypt, made sure to include all of the store’s big names while styling and choreographing the show.

The crowd, which included several local designers, interacted amazingly with the outfits walking down the runway. The invitees instantly fell in love with the garments that many of them went on and bought several items right off the runway.

The number of high-end purchases is constantly increasing for international brands, despite that over 26% of the total Egyptian population lies beneath the poverty line, according to the latest report Central Agency for Public Mobilization and Statistics (CAPMAS),  released in 2013.

According to many fashion insiders, the escalating number of specialised events and mega-international malls defines Egypt as a developing country in the field of fashion

Those brands were first introduced to the Egyptian market back in the early ‘90s. After the 25 of January Revolution, the shakey conditions slowed down investments. However, during the past two years, more than 10 well-known names opened for the first time in the Egyptian market.

Sherien Farouk used to work as sales director of a famous leading store. Before the current major spread, it used to be the most famous luxury store in town, especially since they had many exclusive brands.

“We had all the big names that you can imagine,” said Farouk. “The store’s owner used to travel everywhere to personally pick the latest designs for her clients.”

She added that, although they had a short list of clients, their constant buying habits kept the store going: “I remember this beautiful Lanvin brand necklace that the owner bought on one of her travels. We all thought it would never get sold because it was worth EGP 45,000. However, we didn’t only sell that one, we also sold tens of the same design.”

Luxurious purchases are always related to brand awareness. Some brands represent themselves as classic heirlooms such as Chanel. Each year the price of vintage Chanel purses increases. The current price of any given bag is three times higher than its price back in the 90s. In other words, it is more of an investment.

Meanwhile, other mega names depend on the concept of rarity. Fendi’s monsters, which are mainly key-chains made of fur, are currently the most popular accessory in the world. Their retail prices are as expensive reaching thousands of dollars.

In order to buy one you have to go through a very long waiting list that might take months. In Egypt, they are only available at a renowned designer-store.

“I have 11 monsters,” declared A.B, who is in love with Fendi’s latest creations. “You cannot just find them anywhere; I know people at Fendi who call me whenever they have a monster available and I just rush to the store and get it on the same day.”

From a scientific point of view, the current brand obsession is a reflection of the modern judgmental nature of the community.

“The rise of upper-middle class in the past 30 years certainly marketed the high-end brands,” said Omar Shahin, a psychiatrist.

“Some people tend to spend money on brands they do not really understand just for the sake of social image,” he added.

Shahin also mentioned that the cars people ride and international-educational institutions is currently a part of the social-status equation.

However, he stressed that motives behind luxurious purchases are not always the same; preferring to label the phenomenon as an individual matter rather than a societal issue.

“Some people do buy designer garments because they like it or because they are seeking better quality, while others only care about their social prestige,” he said.

Shahin also added that he doubts there is any relation between the recent political events and the high-end designers’ increasing popularity.

“This trend has been going for more than 10 years now due to the community changes,” said Shahin. “We didn’t use to hear about high-end brands this frequently. Our mothers and the generations before them never gave this much attention to the matter.”