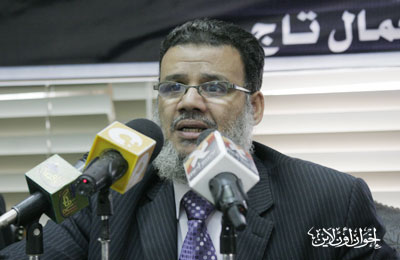 Another 65 defendants received prison sentences ranging from three to ten years, while 14 others were acquitted from all charges.

The defendants were charged with murder, belonging to a terrorist group, destroying public and private property.

Violent clashes were witnessed following the forced dispersal of the encampments in support of ousted president Mohamed Morsi in August 2013. In many cases, demonstrators were confronted by riot police, leading to further arrests and deaths.

Ismail was a prominent lawyer during the reign of former president Hosni Mubarak, and defended members of the radical Islamist groups during the 1990s. He was arrested in 1997 as a part of crackdown against Islamists.

He was elected as a parliament member in 2011, and gained notoriety for statements such as calling to ban Christians from running for presidency, and adding “Islamist lines” to the parliamentary oath.

In one incident, Mamdouh interrupted the parliament session to recite the call for afternoon prayer.

Hundreds were arrested during the violence resulting from the Rabaa Al-Adaweya dispersal, and are currently being prosecuted in different cases, such as Al-Fatah Mosque trial.