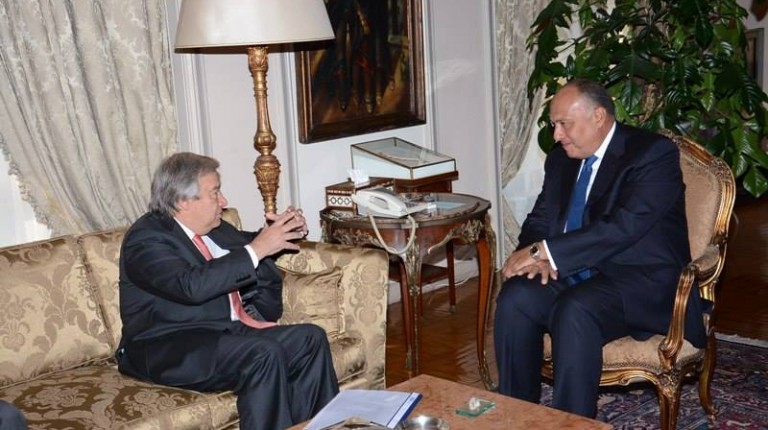 The UN representative praised “the excellent level of cooperation between Egypt and UNHCR (the UN refugee agency) and the regional office in Cairo”, said the foreign ministry spokesman.

Guterres also expressed appreciation for “assistance and facilities offered by Egypt” for Syrian refugees, highlighting “the provision of education and health services for them just like Egyptians, as well as hosting refugees of different nationalities”, the spokesman said.

Guterres praised for Egypt’s role in securing a ceasefire in Gaza and the “restoration of Egypt’s regional role as a key element of stability and peace in the region”. Shoukry and the UN representative agreed to continue cooperation into the future.

Egypt is currently host to 139,333 Syrian refugees who fled the violent conflict that has raged in their country since 2011, according to UNHCR.

There is a funding gap of approximately 61% for the funds required to assist the refugees in Egypt.

Egypt is also a transit country for many refugees from Africa, with many attempting to travel to Europe or Israel.

In July 67 people were arrested attempting to sail across the Mediterranean Sea towards Italy.