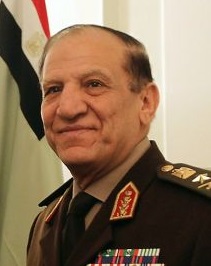 Sami Anan, former Chief of Staff, announced on Sunday that he would participate as a candidate in upcoming presidential elections.

The general, who was forced into retirement by former president Mohamed Morsi in August 2012, made the announcement for his presidential bid on Monday in a press statement, adding that he and his campaign would hold a press conference “soon” to detail Anan’s candidacy.

Anan was Chief of Staff of the Armed Forces from 2005 until Morsi announced his retirement along with Commander-in-Chief Field Marshall Mohamed Hussein Tantawi on 12 August 2012. Following his retirement, Morsi appointed him as military adviser to the presidency. He resigned on 1 July, a day after nationwide anti-Morsi protests took place and only two days before Morsi’s military-backed ouster.

He was also deputy chairman of the Supreme Council of the Armed Forces (SCAF) during the in the post-Hosni Mubarak transition that began in 2011. Before that he was Air Defence Forces Commander from 2001 to 2005.

Anan is the second Egyptian to announce his candidacy for president. Earlier this month Nasserist politician Hamdeen Sabahy, who finished in third place in the 2012 presidential elections, declared that he would also vie for the presidency.

Many expect Anan to also run against a fellow military man, current Commander-in-Chief and Minister of Defence Abdel Fattah Al-Sisi, who has not officially declared his candidacy. However, amid speculation that Egypt’s top general would compete in elections, SCAF last month issued a statement saying that the council “could not help but respect the will of the broad masses in the nomination of Al-Sisi for presidency, which it considers a mandate and an obligation”.

The constitution dictates that Al-Sisi would have to retire from the armed forces before competing in presidential elections.