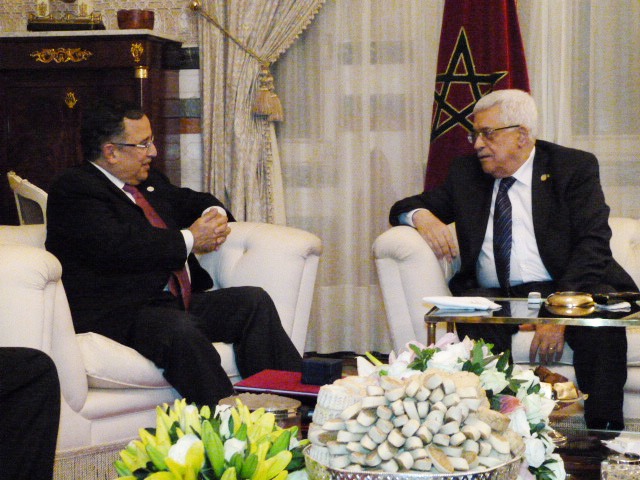 Fahmy and Abbas discussed the outcome of the recent Arab Peace Initiative meeting in Paris. Abbas “thanked the Foreign Minister for the constructive and positive attitude adopted by Egypt” during the meeting with United States Secretary of State John Kerry. Fahmy also received an update on the progress of US mediation efforts between the Palestinians and Israelis.

The Ministry of Foreign Affairs said in a Friday statement that Fahmy “expressed hope that the US side and the international community would exert the necessary pressure on the Israelis to urge them to deal positively with the ideas that arise in order to revive the peace process.” He stressed that Egypt “would spare no effort” in supporting the Palestinian cause.

Earlier this week in Paris, Kerry stated that the Peace Process is at a “critical point” as final status negotiations between the Palestinians and Israelis continue amid renewed tensions over increased settlement activity in the West Bank. He stressed the importance of the Arab role in the process of achieving peace in the region.

The Israeli government approved the building of 272 new homes in the Palestinian territory in the first week of January. Settlement building has been one of the major sticking points in the peace process and the refusal of the Israeli side to freeze such activity caused talks to fail in 2010.

Abbas and Fahmy are among several representatives attending the 20th session of the Al Quds [Jerusalem] Committee, which is part of the Organisation of Islamic Cooperation and chaired by King Mohamed VI of Morocco. The session is scheduled to last for two days.

The committee was established in 1975 and aims to review any resolutions relating to the issue of Palestine and see they are implemented. Other countries represented at the meeting include Lebanon, Iran, Indonesia, Bangladesh and Saudi Arabia.