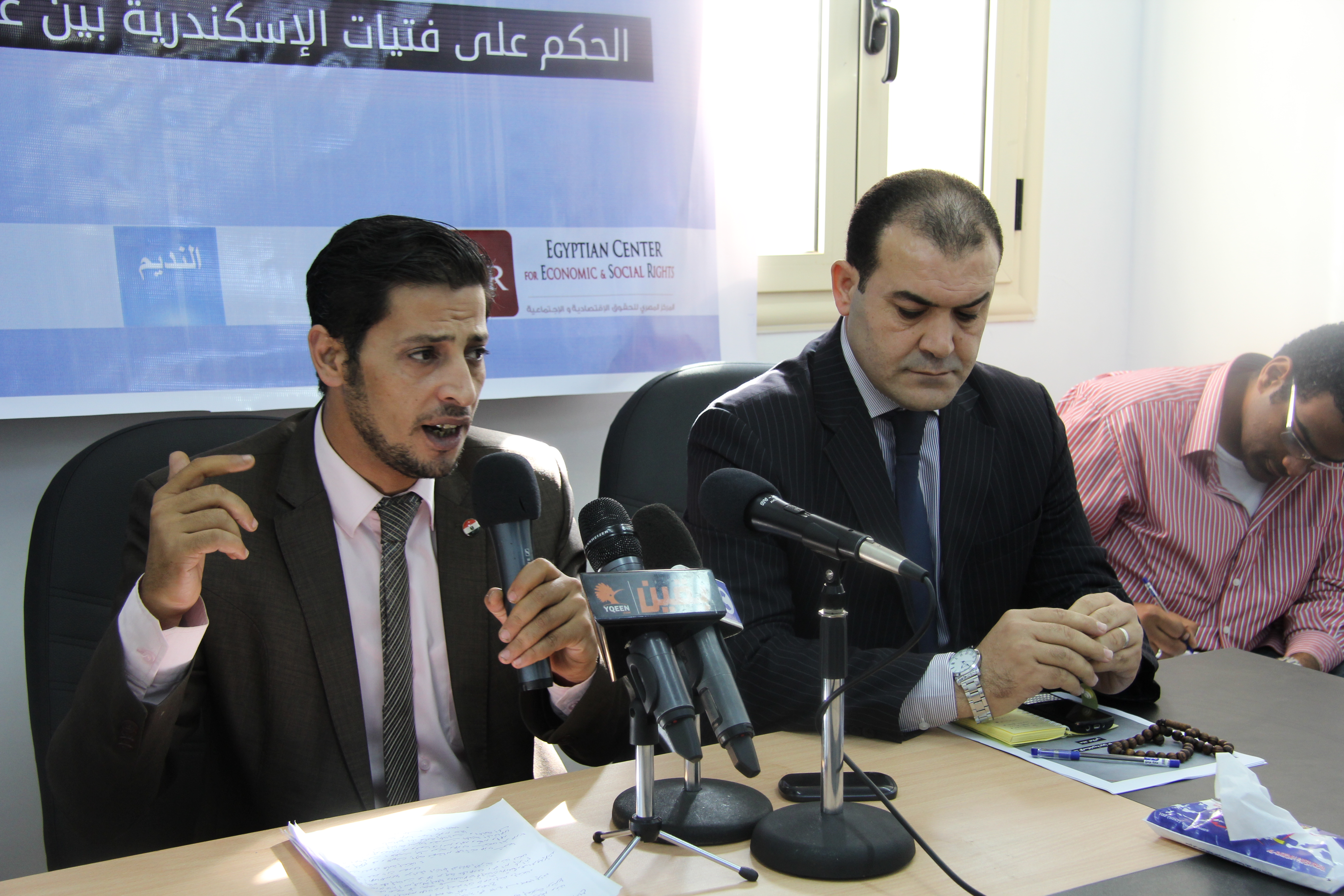 In the early morning of Thursday, 31 October, in the Sidi Bishr district of Alexandria, a group of several dozen demonstrators made their way down Syria Street towards the Mediterranean city’s Corniche.

The group marched brandishing yellow “Rabaa” signs and chanting against the interim government.  The protesters, mostly women and girls, belonged to the 7am movement, a group protesting the military-backed ouster of former president Mohamed Morsi on 3 July and the forcible dispersal of a sit-in by his supporters at Rabaa Al-Adaweya.

Reaching the meeting point of the street and the Corniche, the demonstrators gathered near the site of a work of graffiti depicting well-known Alexandria activist Hassan Mostafa resisting a policeman.  It was here where the 21 demonstrators were arrested by police and military officers, and on 27 November, handed first-degree sentences by Sidi Gaber Misdemeanor Court.

Fourteen of the defendants were sentenced to 11 years and one month in jail on charges of acts of violence, encroachment on public and private property, and possession of melee weapons. The remaining seven were minors and were sentenced to juvenile detention until coming of age to serve in a penitentiary with adults.

The alleged “instigators” of the protest, six men, were also sentenced to 15 years in jail, however are yet to be apprehended by authorities.

The verdict left many in a state of shock and garnered much speculation. Daily News Egypt has investigated the case to ascertain the reasons for the verdict and what really happened on 31 October.

One elderly doorman on Syria Street, who preferred to remain anonymous, claimed he witnessed the incidents in the early hours that Thursday. “The protests arrived at Syria street at around 7.30am, and 10 minutes later, a resident of the Businessmen Building [an office complex at the Corniche end of the street] threw [an indistinguishable object] at the group from his balcony,” he said. “This caused chaos, and the protesters started hurling rocks at the resident. This didn’t last long, though, as the police and army soon arrived and arrested the protesters.”

Another doorman on the same street, who also requested anonymity, said “no tangible damages” were caused by the demonstrators’ rock-throwing, except for “a scratch in the Businessmen Building’s glass door.”

These eyewitness testimonies line up with the investigations report from Eastern Alexandria Prosecution, a copy of which was obtained by Daily News Egypt.

“As proven by the prosecution’s review of the incident scene, there were damages at the [the Businessmen Building’s] door, scratches on the door, and damage to the door hinge,” it read.

Mostafa Mohamed Youssef Mohamed, who works as a security guard in the Businessmen Building and was called as a witness in the trial, said in the prosecution’s investigatory report that these damages cost EGP 1,500.

Mohamed confirmed that the building’s residents had thrown unidentified projectiles at the protesters after they had chanted “in support of Morsi and the Rabaa Al-Adaweya sit-in.”

Mohamed added, according to the prosecution report, that the protesters had hurled rocks at the building and tried to remove the building’s door. The doormen and guards had then tried to stop them, he said, so the protesters left and marched towards Corniche.

The other three lawsuit witness testimonies were not as substantial as Mohamed’s, as they had not directly witnessed the events of the protest, according to the report.

Another point in the prosecution’s report is the objects found in the possession of the arrested: 70 leaflets, 25 badge and eight banners, all supporting Morsi.

Meanwhile, both the report and the Ministry of Interior’s traffic department attested that no road blocking occurred during the protest; despite this, the presiding judge, Ahmed Abdel Megid, charged them with road blocking regardless.

The case was then referred to Sidi Gaber Misdemeanour Court, while the minor defendants were referred to the Alexandria Children’s Prosecution.

The defendants are also being investigated State Security Prosecution on charges – submitted by Homeland Security – of joining a banned group, the Muslim Brotherhood.

However, Ramadan Abdel Hamid, husband of defendant Salwa Mohamed Al-Menyawi and father of defendant (and minor) Rawda Ramadan Abdel Hamid, said that not only were his wife and daughter not members of the Brotherhood, but that were not even participating in the protest. “They were walking to my office on Syria street when they were arrested,” Abdel Hamid said in a Tuesday press conference at the Egyptian Initiative for Personal Rights’ (EIPR) Alexandria headquarters.

Lawyer Ahmed Al-Ghamry, a member of the defence team, confirmed that while Al-Menyawi and Abdel Hamid were not Brotherhood members, the rest of the defendants were. However, Al-Ghamry then cited to Daily News Egypt a number of what he called “abnormalities” in the case pertaining to the judiciary.

“The toughest verdict issued by Judge Abdel Megid is two years in prison,” he said. “If a judge feels that his political affiliations would affect his verdict, he should not issue one; he should not put himself in an area of suspicion.” That in mind, Al-Ghamry noted that Abdel Megid had been photographed participating in 30 June protests against former president Morsi.

He added that “the time between the beginning of the investigations and the referral of the detained to court was very short.”

Further, Al-Ghamry called the women’s detention pending interrogation “unusual” since “there were no clear reasons to detain them. In another case, a man who was arrested in possession of live ammunition and released on EGP 2,000 bail.”

Al-Ghamry also cited as aberrant that the judge had the lawyers state their pleas for four hours. However, all the lawyers’ requests – including requests for additional time and witnesses, and appeals over the legality of some articles upon which the detained had been charged – were rejected.

Of particular concern, Al-Ghamry said, was the arrest of the defence team’s lead council, Ahmed El-Hamarawy. The lawyer was released on 2 December pending investigations after being detained for his role in clashes that occurred on 16 August in Alexandria.

“I believe these are methods to scare El-Hamarawy and other lawyers away from representing the girls,” said Al-Ghamry. “We were told to give up on the trial by other police officers and were warned against continuing the defence.”

Meanwhile, EIPR lawyer Hamdy Khalaf, who was working on the case, has cited what he said are several mistakes in the case’s legal proceedings.

“The defendants shouldn’t be referred to Misdemeanour Court while there are still investigations in the same case in State Security Prosecution; they shouldn’t be tried for the same crime twice,” Khalaf said. “Article 32 in the Penal Code states that if a defendant commits multiple crimes during same incident and some of those crimes belong to a higher court, then the whole case must be referred to the higher court. So the defendants in this case should have been referred to criminal court.”

Khalaf also said that Law 10 for 1914, one of the laws under which defendants were referred to court, was cancelled after Egypt ratified the International Covenant for Civil and Political Rights. The law had been put in place during the British occupation, and prohibited assemblies of more than 10 persons at a time.

In misdemeanor crimes under Egyptian law, according to Khalaf, the second clause in Article 32 of the Penal Code states that if series of crimes are committed for the same purpose, the defendant should be handed the toughest verdict in one crime but “not a total of all crimes’ verdicts, which happened in this case.”

Such suspicions have only increased after, on Saturday 7 December, an appeal hearing under a different judge at the Sidi Gaber Appeals Court concluded with the defendants receiving reduced court verdicts. The contrast has thus raised questions over the procedures taken in the first trial.

The defendants were released after the court handed 14 of the defendants each one-year suspended sentences and acquitted seven others. The verdict included the release of seven female minors, who had also been found guilty, from a juvenile detention facility, where they were to remain until eligible to serve the remainder of their sentences in a prison.