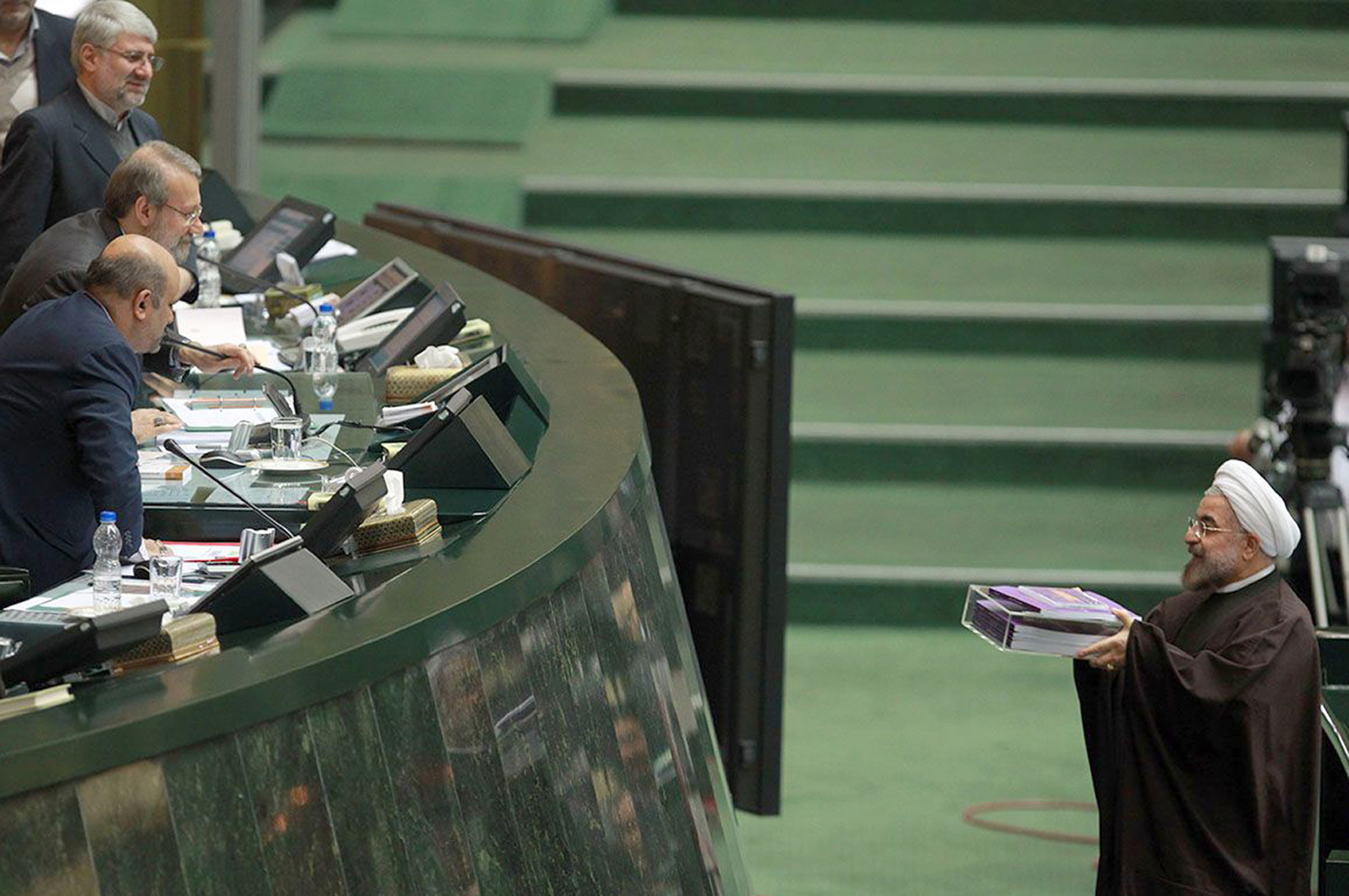 Reuters- Iranian President Hassan Rouhani said bringing down inflation and boosting growth were his government’s economic priorities as he presented his first budget to parliament on Sunday.

Gross domestic product had contracted by 6% over the past year, Rouhani said, while inflation was running at 44% when he took office in August. He described the situation as “very worrying”.

Rouhani described sanctions as “oppressive” but also blamed Ahmadinejad, saying his government’s “unpredictable behaviour” had compounded problems such as inflation and unemployment.

“Employment is the most important future issue for the economy but now the biggest problem is [tackling] stagflation,” Rouhani said in a live address on state television.

“The combination of stagnation and inflation over the past two years was unprecedented,” he said.

Rouhani earmarked government spending for the year starting in March 2014 of $66bn, calculated on an open-market exchange rate, with an overall budget ceiling estimated at about $265bn, Iranian media reported, leaving flexibility to lift spending depending on income received during the year.

Ahmadinejad’s overall draft budget ceiling for this year was about $200bn but the full budget was never approved. In August, officials under Rouhani indicated the spending plans faced massive shortfalls.

“The [Rouhani] government has dared to present a 12-month budget and that’s a bit of a risk. He’s prepared to tell people what can be afforded but he’s also showing an element of financial discipline,” said Mehrdad Emadi, an Iran-born economist at Betamatrix consultants, based in Britain.

In office from 2005 until August, Ahmadinejad presided over a period of unparalleled revenue growth due to high oil prices and was able to fund ever increasing budgets until Iran’s oil receipts were targeted by new sanctions at the start of 2012.

Critics say he squandered billions of dollars on cash handouts and housing projects, stoking inflation and making the new government’s task even greater.

Rouhani indicated that a new mechanism for subsidy payments would be implemented soon. He also stressed the importance of increasing Iran’s total gas output through new phases of the giant South Pars gas field.

Rouhani secured a landslide election victory in June promising a policy of “constructive engagement” with the outside world would help ease international sanctions on the Islamic Republic imposed over its nuclear programme.

Iran denies accusations by the West that it is seeking to develop nuclear weapons capability.

The draft budget estimates oil exports at about 1.1 million barrels per day (bpd), the oil ministry website Shana said on Tuesday, indicating Tehran sees no major recovery in sales next year despite the prospect of limited sanctions relief.

Iranian media reported last week that the 2014 spending assumes an average oil price of $100 per barrel, about $10 below benchmark Brent crude prices.

The International Monetary Fund expects Iran’s economy will shrink 1.5% this year in inflation-adjusted terms, after an estimated 1.9% contraction last year which was the biggest since 1988, when Iran’s eight-year war with Iraq ended.