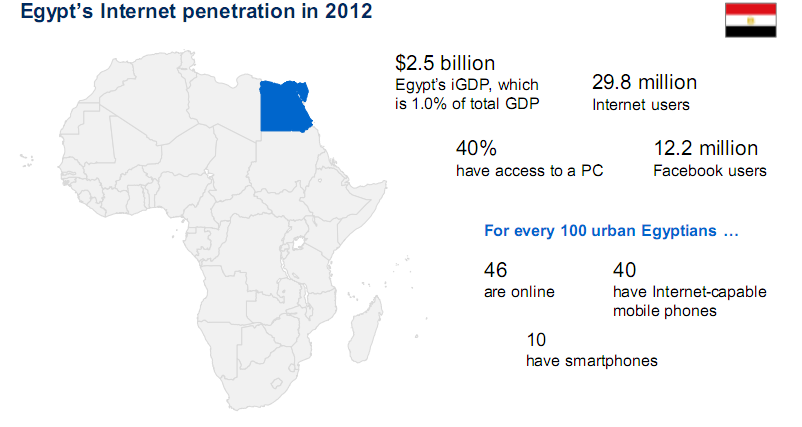 A recent study conducted by the Global management consulting firm Mckinsey & Company, published in November, stated that the internet contribution to the gross domestic production (iGDP) is around 1% at $2.5bn.

Earlier this month, Wael El-Fakharany, the regional manager for Google in Egypt and North Africa, told AlBorsa newspaper that the global internet economy amounted to more than $1tn in 2010, while it registered EGP 15.6bn in Egypt, representing 1.4% of the GDP.

The Mckinsey & Company’s report said that “Nigeria, South Africa, Egypt and Morocco have the most diversified iGDP profiles in our sample.”

It added that the main driver for this contribution was the private consumption with 63% of the iGDP. Public consumption represented 18% while private investment registered around 23%. The trade balance, however, negatively contributes to the iGDP will -3%.

Comparing it to African countries, the Mckinsey study said that “Egypt stands out in terms of private investment and public expenditure in per capita terms, although there is room to increase both as a percentage of GDP.”

The “Lions go digital: The internet’s transformative potential in Africa” report also stated that the main three reasons why Egyptian go online is to access social networking websites, with the number of Facebook users reaching 12.2m.

The second and third reasons were to check their emails and to read.

On a 0-7 scale, the report said that the internet usage within companies was 4.6.

The global consultancy company developed 5 pillars to assess the strength of the internet ecosystem in the country. The Internet 5 Foundations pillars (i5F) were the National Information and Communication technology (ICT) strategy, infrastructure, Business Environment, Financial Capital and ICT Skills Base.

Egypt scored 49% in the national ICT category and 41% in the infrastructure. The score of the business environment was 53% and the financial capitals received a 49% score. The ICT skills base received the lowest score to stand at 20%.

“Egypt fares relatively well on a number of the i5F internet foundations, with an overall score of 42 percent. This places it fourth in the sample, behind South Africa, Morocco, and Kenya,” the report read.

It added that Egypt performed relatively well on most dimensions but will need to invest in developing human capital and high-tech skills in order to realise its ICT vision. It went on saying that IT courses offered by IBM were a start but the problem “will have to be tackled on a wider scale.”

“Egypt’s most immediate hurdle, however, is the need for social and political stability as a necessary condition for growth. A stable Egypt could bring back, if not increase, ICT-related foreign direct investment,” the report said.