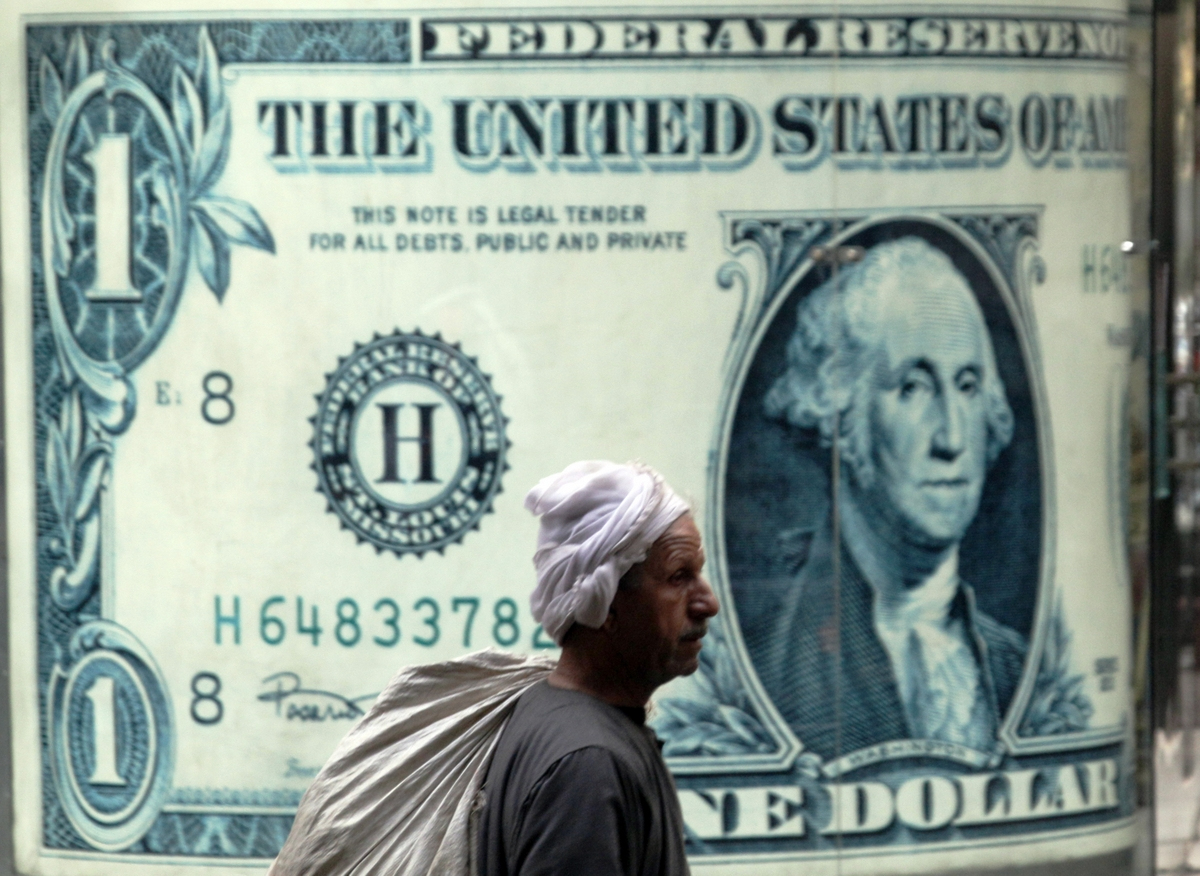 Alongside political transitions in Egypt, economic expectations alter between positive and negative outlooks. With the economy being hammered and investments threatened after the political unrest following 30 June, the government has unveiled a new economic stimulus plan.

The interim government has tried to give positive economic signs after former President Mohamed Morsi’s ouster on 3 July. It expected the budget deficit to reach 9.1 percent of GDP in the fiscal budget 2013/2014, which is about LE186 billion, a fall from the LE204.9 billion recorded in the first 11 months of the 2012/2013 fiscal year, according to a report issued by the Ministry of Finance in July.

Financial analyst at EFG Hermes Wael Ziada said reducing the budget gap to nine percent in the current economic status is a tough mission. “But the government should implement rapid solutions to achieve it,” he added.

This means the government is facing a challenge to decrease the current high budget deficit of the 2012/2013 fiscal year, which represents 13.8 percent of GDP amid the current political and economic turmoil which has caused major market upheavals.

Looking optimistic, total revenues for the current fiscal year are expected to reach LE505.5 billion, according to the same report, with tax revenues amounting to LE358.7 billion, non-tax revenues LE146.8 billion, and other revenues LE144.4 billion. While it is expected that total expenditure will reach LE689.3 billion, LE171.2 billion will be for wages and workers’ compensation.

The stimulus plan announced by the government to commence by the end of August and span nine months, involves additional investment projects, however Minister of Planning Ashraf El-Araby earlier in August stressed that the government will finish current projects before starting new ones.

The government’s plan primarily focuses on developing the infrastructure sector and includes investment projects involving strengthening electricity grids, the completion of 17 road projects to link all the governorates, finishing the construction of 50,000 residential units, reclaiming 32,600 agricultural acres, and buying 600 buses for public transportation to work with natural gas–which will decrease energy subsidies granted by the government–among other projects.

Moreover, the government is seeking to achieve LE170 billion in investments by the end of the current year, according to Ashraf Saleh, the Minister of Investment, who pointed out that investments dropped by 14 percent over the last three years compared with rates seen in 2008.

Meanwhile, an influx of aid from Gulf countries has offered much-needed support to the government: Finance Minister Ahmed Galal stated in a press conference earlier in August that the government planned to reduce the budget deficit by relying on grants from “friends.” At the same conference, Galal said the ministry intends to “rationalise unjustified expenditure” such as energy subsidies.

Offering safer ground, Kuwait will allow Egypt a five-year period rather than an initial one year to return the US$2 billion deposit it had given the Egyptian government.

Burdens on the government

Economy professor at Cairo University Fakhry El-Feky said the interim government currently bears many burdens which might make its target of reducing the deficit more difficult. As an example, setting the minimum income law from the next year will cost the government LE90 billion, he said.

With the current wage structure which makes up 30 percent of GDP, according to Ministry of Planning figures, the government decided in September to set a LE1,200 minimum income to be effective from January 2014. The finance minister announced in October that incomes of government employees at different job levels would range from LE1,201 to LE3,740, and that over 4.8 million workers will benefit from the minimum income.

At a meeting held with the American Chamber of Commerce in September, Galal said that the new minimum income law, which would take into account the career progression of state employees, will cost the Treasury upwards of LE20 billion.

Ahmed El-Naggar, an economic expert at the Ahram Center for Political and Strategic Studies, said setting the minimum wage law should ensure an annual change in wages to fit the official inflation rate every year, and emphasised the importance of implementing the same value of the wage on the private sector.

A financial report released by the finance ministry in September showed that public expenditure included LE141 billion for wages and compensation, representing a 14.8 percent increase from the preceding year.

Taking into account the unstable economic status, many rights activists and workers were unsatisfied by the decision, requiring as a reasonable start LE1,500.

However, this decision was in reference to the minimum income, not the minimum wage. This figure of the minimum income includes the monthly salary and any additional income such as bonuses, compensations and overtime, according to Heba Khalil, the head of economic research at the Egyptian Centre for Social and Economic Rights (ECESR).

Meanwhile, the implementation of a minimum income within the private sector is still under discussion between the government, businessmen, associations and investors.

Maximum wages have not been discussed yet on the official level. However, El-Feky criticised the concept of a maximum wage, saying that it will negatively affect skilled persons who may leave the public sector due to being underpaid comparing with the private sector. “In my viewpoint, it is better to impose maximum profits, not maximum wages,” he said.

In disagreement is El-Naggar, also the chief editor of Strategic Directions, who said that imposing a maximum wage will achieve social justice, besides helping in funding the minimum wage increase.

Prime Minister Hazem El-Beblawi said in a televised interview in July that he had submitted a wages law to former Prime Minister Kamal El-Ganzouri in 2011 when he was the finance minister. The law, he said, put a maximum wage at no more than 35 times the minimum wage.

El-Feky, who was also former assistant of the executive chairman of the IMF, added that the government’s decision in October to increase pensions by ten percent will cost the government LE2.5 billion.

Hoda Kamel, a pensioner’s solidarity syndicate member, earlier explained that the government owes pensioners LE600 billion from pension money which it used to lend institutions. “The Insurance Authority, which is responsible for the pensions, was putting its money in the National Investments Bank, which the bank used to lend to investors,” she said.

“If the government depends on increasing the issue of cash, or on borrowing from any entity, this will definitely lead to an inflationary disaster,” he added.

Ziada said that reducing the budget deficit can be achieved through raising the efficiency of tax collection.

However, revenues from income taxes will be reduced due to implementing a new decision increasing the limit for personal exemption from LE4,000 to LE7,000 annually, according to a statement from the Ministry of Finance in October.

Though this decision reduces the burden for low-income individuals, it will lead to an annual loss in revenue for the treasury from income taxes of LE4 billion, according to the figures which the president of the Egyptian Tax Authority Mamdouh Amr stated in the same month.

El-Feky suggests that the government should add two more tax brackets to the existing brackets: people whose income is more than LE25,000 should be subjected to 30 percent or 35 percent tax instead of 20 percent, he said.

El-Naggar however believes that the tax system should be more fair: “Poor people should be exempted from paying taxes,” he said.

El-Naggar added that firms’ profits and income tax law should be characterized by multiple brackets, emphasizing the importance of increasing the tax rate according to the capabilities of financers and tax payers.

Meanwhile, the new real estate law, which was supposed to become effective in July this year, is expected to bring the government around LE3 million in revenues after starting its first phase. However, the government announced that the return will have a social aspect, as a quarter of revenues will be allocated to slums re-development, and another quarter to improving localities and citizen services.

Real estate law will affect new-homers who will have to pay ten percent of the total value of their property, while hospitals, educational institutions, non-profit charities and properties which are valued at less than LE500,000 will be exempted from paying taxes.

El-Feky also stressed the need to collect the tax arrears. “This will be a great source of fund if the government took it seriously,” he said.

Another measure to reduce the budget deficit is decreasing the number of ministers’ advisors, which El-Feky said will save around LE1 billion for the government. “Already the government has taken steps toward this measure,” El-Feky added.

Rationalising government spending as a solution

Ziada said the government ought to restructure subsidies in order to save the budget.

El-Feky, opposing this view, pointed out that it is hard to cut energy subsidies because such a decision needs popular support. Energy subsidies currently stand at LE128 billion, according to Ministry of Petroleum figures.

Lifting energy subsidies from rich and foreign companies will not have side effects nor need popular support because this means transferring money “from who does not deserve to who deserves,” said El-Naggar.

The first stage of the project, ending in July, saw the completion of automated trade between petroleum warehouses and fuel stations throughout the country. The second stage, which will see the distribution of fuel to cardholders, is currently under preparation.

The programme, which is overseen by the ministries of petroleum and finance, aims to rein in instances of smuggling and reduce subsidies for petroleum, which have increased three times over the last eight years, from LE40 billion in 2005/2006 to LE128 billion this year.

El-Feky also discussed how the government’s dues to foreign oil companies are creating pressure, thus the government must set a schedule for repayment of those dues.

“The government has allocated a portion from the stimulus package to repay the dues of Egyptian construction companies, thus it has to set a schedule for repaying the US$7 billion for foreign oil companies,” he said, adding that such companies are suffering weak liquidity.

Minister of Petroleum Sherif Ismail noted earlier in October that the dues of foreign partners reached US$6.2 billion, with repayment to be achieved soon in coordination with the Central Bank of Egypt and the finance ministry.

Benefits of narrowing the budget deficit

Reducing the budget deficit will allow more space for the private sector to borrow from banks, said El-Feky. He stressed the important role of the private sector in developing the economy, “and we should never overlook that this sector has been suffering tumbles and low-funding from banks,” he added.

El-Feky explained that narrowing the deficit to nine percent will reduce the government’s request for funds and lead to lower interest prices, which will save more money for the government. “Each one percent reduction in the interest rates will save LE8 billion,” he said, adding that this will encourage the private sector to request loans, and will strengthen the private sector’s role in boosting the economy as it will encourage people, businesses and investors to request loans.

However, the Central Bank kept in November interest rates unchanged, which was seen by analysts a way to curb inflation.