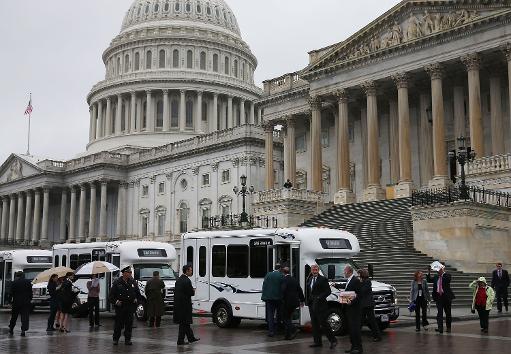 AFP – Finance chiefs of the G20 called for Washington to quickly resolve the political paralysis over its budget and debt ceiling.

Singling the United States out in a statement Friday on the issues confronting global finance, representatives of the world’s most powerful economies signalled worry about the stalemate that could potentially force Washington to default on its debt.

“The US needs to take urgent action to address short-term fiscal uncertainties,” the G20 finance ministers and central bankers — including those from the United States — said in a statement.

Meeting in Washington, the officials warned that there were still risks to global economic growth, and that many countries faced “unacceptably high unemployment.”

Asked about the G20 views of the US political stalemate, Anton Siluanov, the Russian finance minister whose country holds the presidency of the group this year, said they were mostly optimistic about the US reaching a timely solution to the problem of passing a budget and increasing the debt ceiling.

“We wish for this crisis to be resolved as soon as possible,” he said in a press conference.

“No one benefits from… uncertainty,” he said, speaking through a translator.

“That is because it has an impact on everybody… everybody has a stake in this matter.”

Earlier, in an inadvertently broadcast portion of the closed meeting of the G20 officials, Siluanov was more direct: speaking for Moscow, he urged his US counterpart to resolve the political deadlock, which threatens to force the US to default on its debt, “as quickly as possible.”

At that point he expressed doubts that the White House and congressional Republicans were close to a compromise.

“There doesn’t seem to be a prospect for that,” he said.

The G20 group met in Washington on the sidelines of the annual meetings of the International Monetary Fund and the World Bank, where the threat to the global economy of Washington’s political paralysis overshadowed other issues.

Worries were rampant that the US Congress would not pass a budget bill to fund the government, which has been partly shut down since the beginning of the fiscal year on 1 October — or raise the country’s $16.7tn debt ceiling by 17 October, when the government says it will run out of cash to pay its bills.

“Based on what our American colleagues told us, we hope for a speedy resolution by the 17 October deadline,” Siluanov said in the press conference.

A senior US Treasury official told journalists they were not opposed to the G20 statement, underscoring that they too see the urgent need for Congress to pass a budget and raise the debt ceiling.

US Treasury Secretary Jacob Lew also acknowledged in a statement to the IMF’s steering committee that the US reputation as a global financial safe haven was on the line.

“With the deepest and most liquid financial markets, when risk rises, the flight to safety and to quality brings investors to US markets. But the United States cannot take this hard earned reputation for granted,” he said.

Another key worry that the G20 had to address was the threat of monetary tightening — “policy normalisation” — among the advanced countries as they pull away from recession.

A surge in US dollar interest rates in the past six months has fired a pullout of capital from numerous emerging and smaller economies, sparking alarms and sinking their currencies.

More turbulence is expected as the US Federal Reserve moves to “taper” its huge stimulus program — $85bn a month in bond purchases — over the next year.

The G20 sought to assure the rest of the world that the group’s transition to “normal” monetary policies — which spells a rise in interest rates from the uncommonly low levels currently — will be “carefully calibrated and clearly communicated.”

They said they recognise that volatile capital flows “continues to be an important challenge”, and promised to try to design domestic policies that also support global growth and financial stability and avoid hurting other countries.

But they said emerging-market and poorer countries also need to take their own action.