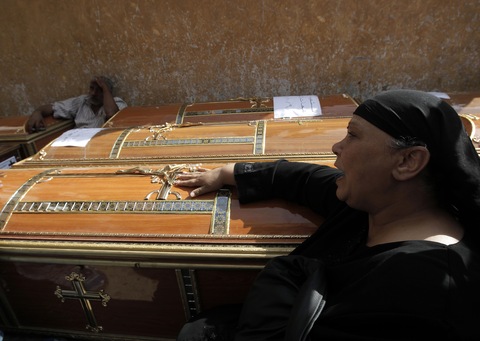 A number of political parties, groups, and civil society organisations marked the two-year anniversary of the “Maspero massacre,” when 28 protesters were killed in front of the State Radio and Television Building on the night of 9 October 2011.

Political parties including Al-Tayar Al-Sha’aby and the Free Egyptians Party announced their participation in a vigil on the site of the violence two years ago. “We pay tribute to the souls of the martyrs who were killed in the massacre and we will continue to demand a fair trial for those involved in the killing,” said Shehab Waguih, spokesman for the Free Egyptians Party in a party-issued statement.

Waguih added that transitional law and constitutional measures needed to be adopted to ensure freedom of belief, the criminalisation of religious discrimination, and protection of places of worship.

Al-Tayar Al-Sha’aby paid tribute to those who had died and expressed condolences to their families. It also highlighted the need for adequate transitional justice in response to the loss of life that occurred at Maspero in 2011, along with other instances of violence throughout Egypt’s transition.

Coptic rights group the Maspero Youth Union said it would take part in a prayer service at Saint Samaan Monastery in Moqattam. The group had said that it would avoid protests and marches in order to avoid friction with the Muslim Brotherhood, which has been staging demonstrations against military leadership in response to the ouster of former President Mohamed Morsi.

The Egyptian Initiative for Personal Rights (EIPR) expressed “deep regret” for the lack of justice in the aftermath of the incident. The rights group highlighted that a military court had convicted three soldiers (two to three years, and the third for two years), while three Coptic protesters were handed three year prison sentences on charges of theft and possession of firearms from the armed forces.

EIPR held investigating authorities and prosecutors responsible for the lack of application of the law and ignoring various requests from lawyers regarding the examination of evidence that could have been useful in court cases. The military court, had “played the role of opponent and referee at the same time,” stated EIPR

The group called for the current Prosecutor General to re-investigate the case of the killing of demonstrators and re-examine the involvement of military and police leaders, especially field officers who had given orders during the protest.

The National Community for Human Rights and Law (NCHRL) released a report called “The Maspero massacre…absent justice,” in which it documented the deaths of protesters and the following legal difficulties.

On 9 October 2011, 28 protesters were killed and over 200 were injured when a largely Christian march protested against the razing of a church in Aswan and the governorate’s subsequent inaction. Most of the protesters died from live ammunition and being run over by military armed personnel carriers in front of the state radio and television building in downtown Cairo.