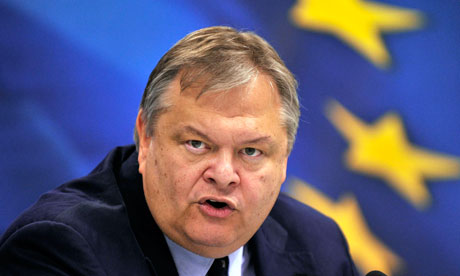 Greece’s Minister of Foreign Affairs is expected to visit Egypt in September to discuss relations between the two countries. Greece is set to assume the presidency of the European Union in 2014.

Evangelos Venizelos, who is also currently the deputy Prime Minister of Greece, was invited to visit Egypt on 5 September by Minister of Foreign Affairs Nabil Fahmy, announced a statement from the Egyptian foreign ministry spokesman Badr Abdelatty.

It is expected that the pair will “discuss bi-lateral relations between two countries, as well as a number of regional and international issues of common interest,” said Adbelatty.

He said: “the visit will also deal with ways of strengthening cooperation between Egypt and the EU in light of Greece assuming the rotating presidency of the EU in January 2014.” The statement added that Greece “fully supports the aspirations of the Egyptian people” and is “in favour of the 30 June revolution.”

Last Wednesday the EU Foreign Affairs Council, which is comprised of the EU members states’ foreign ministers decided to revoke all export licenses to any equipment which could be “used for internal repression” in Egypt. This came in response to the government’s crackdown on the pro-Mohamed Morsi demonstrators within the context of “fighting terrorism”.

The increased violence in Egypt has seen more than 1000 killed within two weeks, assassinations in North Sinai and Coptic Orthodox churches and property attacked and set ablaze. The violence has prompted international condemnation, with many calling on the Egyptian security forces to exercise restraint.

The violence peaked following the security forces’ clearing of two large pro-Morsi sit-ins in Cairo and Giza that had been calling for the reinstatement of the deposed president since his ouster at the beginning of July.