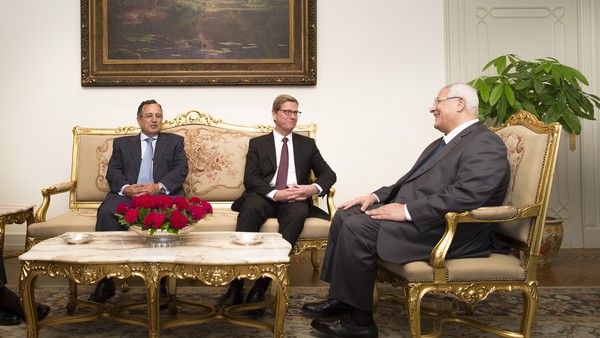 German foreign minister Guido Westerwelle said the international community “must exhaust all possibilities of diplomacy” to end violence in Egypt, and stressed that all decisions must be made by the Egyptian people

Following a two-day visit to Egypt during which he met with many parties to the current crisis Westerwelle said “It would be a mistake if the international community would not try on all diplomatic channels… to avoid and escalation of violence to push for a negotiated solution for the future of Egypt.” He added, “We can not look away.”

Westerwelle added that Germany “want[s] to contribute bringing all the mutually opposing political forces back together, so that they start a dialogue and that a fresh start can take place.”

During his visit Westerwelle met with interim President Adly Mansour, Vice-President Mohamed ElBaradei, Minister of Foreign Affairs Nabil Fahmy, and Minister of Defence General Abdel Fatah Al-Sisi. The German minister also met with representatives of the Freedom And Justice Party, and other groups that support the reinstatement of deposed President Mohamed Morsi.

He also met with representatives from the Salafi Al-Nour party, Misr Al-Qawia, the Coptic Church and the Tamarod (rebellion) group, which organised the mass protests on 30 June that prompted the armed forces intervention to oust Morsi.

Fahmy and Westerwelle met on Thursday to discuss the current situation in Egypt and the development of the Nile Basin Initiative. Fahmy asserted the interim government’s commitment to moving forward with the road map proposed by the armed forces following Morsi’s ouster.

A ministry statement said Fahmy stressed that Egypt is open to listening to “the views and opinions of external parties, but the final decision is ultimately in the hands of the Egyptian people.” Westerwelle agreed in a separate statement, “at this crucial stage… the Egyptian people must decide for themselves.”

The spokesman for the armed forces told the Daily News Egypt that Westerwelle was denied a meeting with Morsi, adding that the decision was not made by the armed forces.

Westerwelle was the first foreign diplomat to directly call for Morsi’s release in July. German Ambassador to Egypt Michael Bock reiterated this call but requested that access be allowed to Morsi to help move forward.

High Representative for Foreign Affairs at the European Union, Catherine Ashton, met with Morsi on Monday evening, confirming that he was “well” and has “access to television and newspapers”.