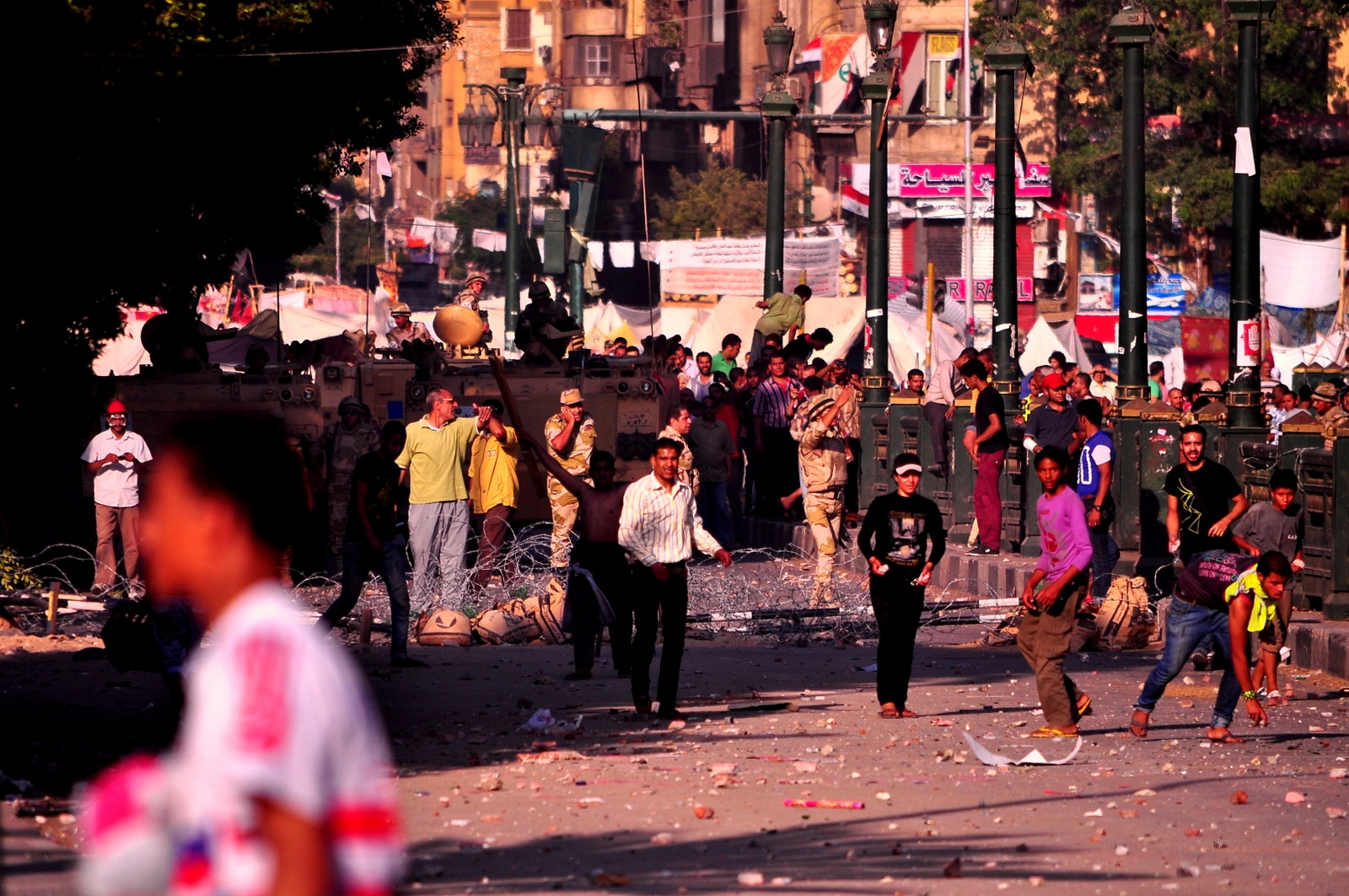 Clashes erupted late Monday afternoon in the Cairo neighbourhood of Garden City along the Corniche and in front of the British and American Embassies between pro- and anti-Morsi demonstrators. State-run Al-Ahram Online reported one person dead and 21 injured.

The violence began shortly after 4 o’clock as a pro-Morsi demonstration in front of the High Court marched to protest in front of the American Embassy.  As the march passed Tahrir Square near Qasr El Nil Street, protesters from both sides began a volley of stones, Molotov cocktails and fireworks.

Members of the pro-Morsi rally said they had decided to march to the American Embassy to protest what they perceive as the United States’ meddling in Egyptian affairs.

“We’re going to the American Embassy because all the [political] games in Egypt are controlled by the Americans,” said Mohammed Wahba, a businessman from Moqattam, before the clashes began.

Although military armoured personnel carriers, at least one tank and a barbed wire barricade protected the entrance to Tahrir Square, anti-Morsi demonstrators crossed it to meet the pro-Morsi marchers. At least one anti-Morsi protester was photographed carrying two handguns.

Clashes continued as supporters of the ousted president retreated from Tahrir Square and towards the American Embassy along the Corniche.  Anti-Morsi demonstrators pursued them until they were driven away by a series of gunshots from a group outside the Shepheard Hotel.

Anti-Morsi protesters returned minutes later with the assistance of Central Security Forces armed with tear gas, riot gear and two armoured vehicles.  Both pro- and anti-Morsi demonstrators were armed with stones, slingshots, Molotov cocktails, clubs, sticks and knives.Fighting continued on the Corniche and on the side streets of Garden City where several motorcycles were set ablaze outside the British Embassy.  By 6 o’clock the last of the pro-Morsi supporters were arrested or dispersed.

Not all the anti-Morsi supporters involved in the clashes supported the army.  Mostafa “Teefo” Mahmoud, a 20 year-old Cairo University student from Abdeen, was playing football on Youssef El-Gendy Street near Tahrir Square when fighting broke out.

Mahmoud said the interim government was problematic, as well.

“They force us to fight, but they themselves don’t fight.”