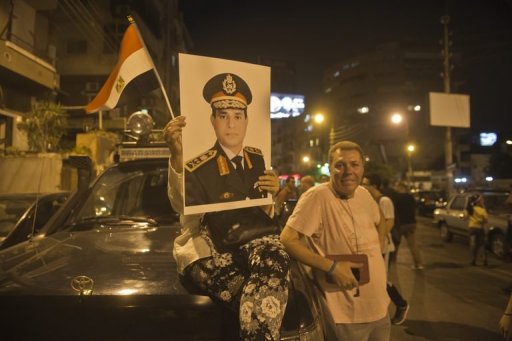 AFP– Army chief General Abdel Fattah al-Sisi, who is emerging as Egypt’s strongman amid the turmoil sweeping the country, is desperate to end the crisis but without a return to the unpopular military rule of 2011-2012, experts say.

The army high command’s dramatic intervention on Monday with a 48-hour ultimatum to Islamist President Mohamed Morsi to reach a deal with his opponents or have one imposed earned Sisi the adulation of protesters camped out on the streets.

But it prompted a call to order from the president, who under the constitution is commander-in-chief and head of the administration in which Sisi serves as defence minister.

But to the president’s supporters, the army’s intervention amounted to a thinly veiled threat to launch a coup and return Egypt to the military rule that governed the transition from Hosni Mubarak’s ouster in February 2011 until Morsi’s accession to power in June last year.

In a statement posted on his official Twitter account on Tuesday, Morsi insisted on his “constitutional legitimacy” as Egypt’s first elected president.

“(He) rejects any attempt to overstep it, calls on the armed forces to withdraw their warning and rejects any dictates, domestic or foreign,” it said.

Kamel al-Sayyed, political scientist at the University of Cairo said that Sisi had made steps towards a political agreement in the past.

“General Sisi had already tried to promote a national consensus at the end of last year during the crisis around the new constitution, but met with refusal from the Muslim Brotherhood,” he said.

Politicians and journalists who have met Sisi believe his main preoccupation is rebuilding the army’s reputation, tarnished by its time in control of the country with the Supreme Council of the Armed Forces.

After the short honeymoon period that followed the fall of Mubarak, the army found itself jeered with slogans such as “Down with the military regime,” similar to those chanted against Mubarak.

Abdullah al-Sennaoui, journalist at the independent daily Al-Shorouk, who has met Sisi several times, stressed that the general had “clearly been affected by the deterioration of the image and credibility of the army” during its term in power.

At 58, Sisi is 20 years younger than his predecessor, Field Marshal Hussein Tantawi, a veteran of the Arab-Israeli wars and one of Mubarak’s closest allies.

When Morsi sidelined Tantawi in August 2012 and replaced him with Sisi, there was speculation of a possible alliance between the military and the new Islamist leaders, to which the army had previously been hostile.

Even if he is part of an Islamist-dominated government, General Sisi, who enjoyed a successful career in the top brass before taking up the prestigious post of head of military intelligence, seemed to be a military insider.

He has said in the past he is keen on “increasing the efficiency of the armed forces”, seen to be outdated and currently struggling to restore order in the troubled Sinai Peninsula area.

Known to be devout, Sisi was accused of being too close to the Islamists when he was nominated to the post. But like many Egyptian officers, he is also a fervent admirer of the former nationalist president Gamal Abdel Nasser.

Born in Cairo in November 1954, he graduated from Egypt’s military academy in 1977 with a diploma in military sciences. He also went on for training in Britain in 1992 and in the United States in 2006.

Egypt’s army has close ties to the US military, which provides it with considerable training and equipment.

Since the Israeli-Egyptian peace agreement in 1979, Washington has been a major backer of Egypt’s army, currently providing support to the tune of $1.3 billion (one billion euros) every year