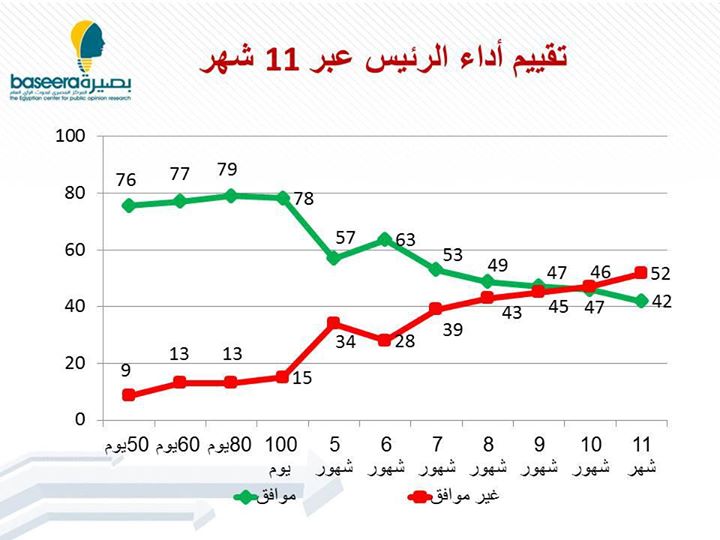 The percentage of President Mohamed Morsi’s supporters has declined from 46% to 42% in one month, according to a poll released on Sunday.

Egyptian Centre for Public Opinion Research (Baseera) released results of a poll that was conducted on the presidential approval ratings after 11 months in office.

He pointed out that Morsi’s supporters in urban governorates fell to 30% marking a decline by 4% since last month, 51% in Upper Egypt losing 8%, and 41% in Lower Egypt marking no change.

The poll also showed a decline among Morsi’s supporters who attended higher education from 38% to 35%, and those with average education from 52% to 46%.

According to the Baseera poll, 30% of participants would vote again for Morsi, the same percentage that was seen last month, while 50% said they are not planning to re-elect him.

The sample was also asked whether they want to hold presidential elections early, which 62% in the urban governorates, 55% in the rural governorates and 46% in Upper Egypt voted yes, or 54% overall who favour early elections.

The poll also demonstrated that youth are more in favour of early elections compared to older age groups, where 60% of those who support the idea are between 18 and 29 years old, compared to 54% between 30 and 49 years old and 48% 50 years and older.

The survey was conducted using landline and mobile telephones, with a sample size of 2,051 respondents aged 18 or older nationwide. All interviews were conducted on 29 and 30 May 2013.

Tamarod movement, a petition campaign aiming to withdraw confidence in Morsi as president and call for early presidential elections, is coordinating with opposition groups to stage mass protests on 30 June against the president.