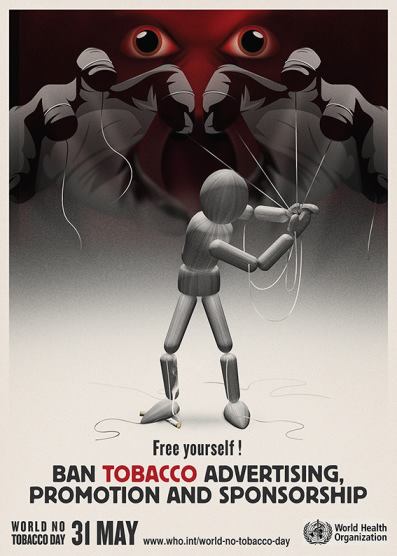 The American Cancer Society and World Lung Foundation unveiled the first-ever Arabic version of The Tobacco Atlas and its companion website TobaccoAtlas.org, during a press conference on Monday. The conference was hosted by the World Health Organisation (WHO), at their regional headquarters in Cairo.

The Atlas graphically details the scale of the tobacco epidemic, the progress that has been made in tobacco control and the latest products and tactics being deployed by the tobacco industry.

Dr Fatima Al-Awa, the regional adviser of the tobacco-free initiative at the WHO, said: “The tobacco epidemic kills nearly six million smokers each year, and 600,000 passive smokers. By 2030, the number will escalate to eight million if no extreme measures are taken. We have a responsibility towards the public by raising awareness of the extreme dangers of smoking, which is why the Atlas was written and published.”

The statistics show that one person dies of tobacco consumption every six seconds. “There is a deadly health crisis occurring globally, especially in the Eastern Mediterranean region. The menace of using tobacco comes from the fact that it kills nearly half of its users,” added Dr Peter Baldini, CEO of the World Lung Foundation. “The Tobacco Atlas is the most authoritative book on the epidemic, and its excellent data must be used to counter the arguments that are made by the industry that strong, smoke-free communities will hurt their businesses. We must stop the industry from targeting young people and women from consuming tobacco with all its forms.”

Dr Hana Ross, a co-writer of the Tobacco Atlas and managing director at the American Cancer Association, discussed the hazards of tobacco consumption among youth. She explained that “smoking is the fourth largest cause of death in Egypt. That includes consumption of cigarettes, shisha and smokeless tobacco.” Dr Ross expressed alarm at the number of young men and women between the ages of 13 and 15 who smoke shisha: “14% of boys and a dramatic increase of 11% of girls smoke Shisha.”

Smoking was further tackled from an economic perspective. Ross showed a graph that explained the prices of tobacco in the East Mediterranean region (EMR). “Egypt is so low on the scale. Tobacco is very cheap, which makes it easier for people, and youth in particular to buy cigarettes. However, in 2010, Egypt substantially changed its tobacco tax system to implement higher tax rates. The excise taxes increased to 78% of the cigarette pack price, the highest proportion in the region.”

“The public should be aware of the fact that smoking is directly related to development of lung cancer among other lethal diseases caused by smoking or exposure. It simply kills,” added Dr Otis Brawley, the chief medical officer at the American Cancer Society.

The panel also offered many solutions to cut down the number of tobacco consumers globally and in the EM region in particular. These solutions included increasing taxes over cigarettes, creating 100% smoke-free environments by activation of laws that prevent smoking in public places, effective tobacco warnings and mass media campaigns to raise public awareness, and banning all forms of tobacco marketing and sponsorship.