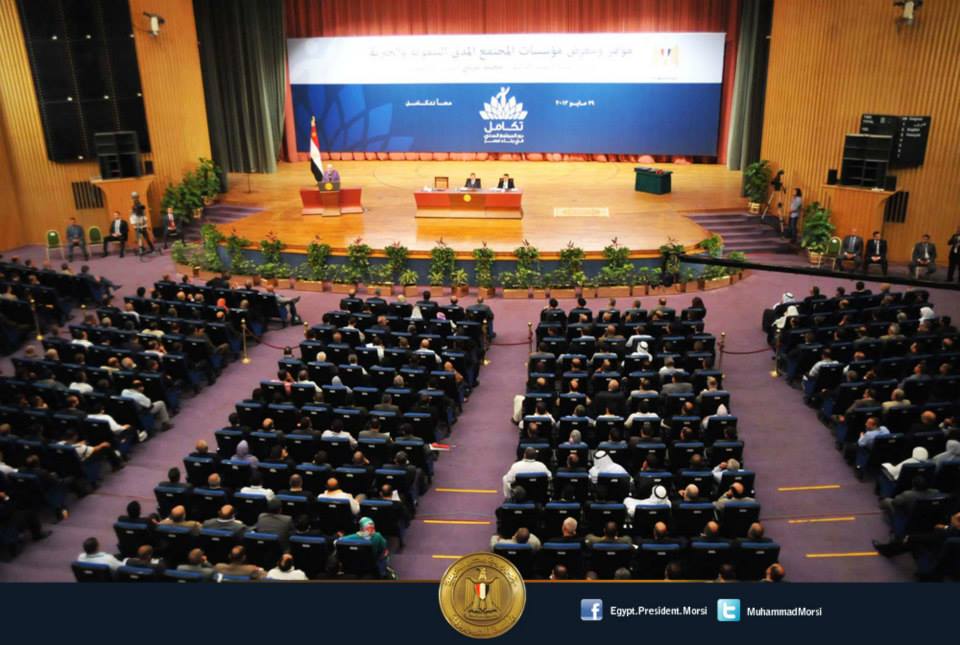 Human Rights Watch – New York – The draft Associations Law that Egypt’s president put before the country’s legislature on May 29, 2013, would allow the government and its security agencies to arbitrarily restrict the funding and operation of independent groups if it is adopted in its present form, Human Rights Watch said today.

Despite some improvements compared to previous drafts, the May 29 draft falls far short of Egypt’s international human rights obligations. It would reinforce and formalize state control over nongovernmental groups by empowering the government to deny them access to both domestic and international funding. It would also give the authorities complete discretion to object to activities of Egyptian and international organisations, including human rights groups that document or criticise rights abuses by the government.

“This draft law dashes all hopes that independent groups could operate freely and independently after the revolution,” said Sarah Leah Whitson, Middle East and North Africa director at Human Rights Watch. “Egypt’s proposed NGO law would allow the government free rein to cut off funding and halt activities of groups that it finds inconvenient. It is hostile to the very notion of independent civil society.”

The draft law has been several months in the making. The presidency took over drafting the law initially prepared by the ruling Freedom and Justice Party after the Shura Council, Egypt’s legislative body, discussed an earlier version for two months without adopting it. Human Rights Watch attended a Shura Council hearing session on March 28 and subsequently met with the members of the Shura Council’s drafting committee and presidency officials to discuss the law in light of Egypt’s obligations as a party to key international human rights treaties.

The Shura council will now discuss the presidency’s draft, with no announced time frame for adoption.

The Presidency has said that the controversial new draft aims to “maintain the balance between Egypt’s openness to the world … and its sovereignty and independence.”

The most significant improvement in the current draft is that it no longer would require all funding obtained by Egyptian and international nongovernmental groups to be considered public funds. That provision would have subjected groups to the supervision of the state Central Auditing Agency and made them subject to disproportionate penalties.

However, the new draft still would give the government excessive powers over civil society groups. Article 18 would grant the government absolute discretion to object to the internal decisions and activities of groups, and to block the decisions if they disapprove. Groups would have to submit an annual financial report, as well as copies of all internal decisions and a report on annual activities to the authorities, who could object and order a halt to any of the group’s activities. If the group did not comply within 15 days, the government could take the group to court.

Article 14 would require groups to notify the government in advance every time they wish to raise money through TV campaigns, charity events, or mail campaigns. It would empower the government to object on any ground and to thereby block legitimate fund-raising.

The provisions on foreign funding are extraordinarily restrictive, Human Rights Watch said. A Coordination Committee would be created to determine all matters related to foreign funding and foreign organizations. Groups would need to obtain permission from the Coordination Committee before they could accept funds from abroad and could be fined or shut down by court order if they didn’t. The committee would include officials from four government ministries and “concerned entities” – a reference to security and intelligence agencies – and four representatives of civil society organizations.

The committee would have absolute discretion to block all access to foreign funding, without any requirement to link the objection to a specific offense, opening the way for the authorities to cut off financial support for any project to which it objects, Human Rights Watch said. Similar provisions in Law 84 have led to arbitrary denials of access to the foreign funding that represents a lifeline for Egyptian human rights groups, often on the grounds that a proposed project addressing torture or abuses of women’s rights was unwanted, Human Rights Watch said. The committee must respond within 30 days and groups would be able to appeal a rejection before a court but since the law grants the Committee an absolute right to object a court is unlikely to limit that right.

Egyptian government officials have claimed that tighter restrictions on foreign funding are necessary for security reasons and because of alleged concerns that that these groups could be used for money-laundering. However, countries with flourishing civil societies address such concerns with regular criminal laws, laws on corruption, and anti-money laundering laws, Human Rights Watch said.

“The Egyptian government may legitimately want NGO finances to be transparent, but it should be ashamed of a law that would allow the government to strangle civil society by arbitrarily banning crucial sources of funding,” Whitson said. “Instead of balancing oversight with facilitating support for civil society, this draft seems to view any and all foreign donations as potential threats to national security.”

The draft law is even more repressive for international organisations than for domestic groups, Human Rights Watch said. The Coordination Committee would have absolute discretion to reject or approve an international organisation’s application for registration, without providing justification, although a group would be able to appeal in court. The committee would monitor these groups, including provisions that it could “object to any of the activities” and order a halt. It also says that foreign groups may not conduct “activities conducted by political parties or those that violate national sovereignty.” These terms are not defined and would be open to abusive interpretation by the authorities, Human Rights Watch said. Under the ousted former president, Hosni Mubarak, the authorities frequently condemned critical human rights reporting as a threat to Egypt’s sovereignty and interference in its domestic affairs.

International law requires that there be no discrimination, including on the grounds of nationality, on organisations’ freedom to associate and operate.

Human Rights Watch closely followed the various drafts of the law discussed by the human rights committee in the lower house of parliament, the People’s Assembly in 2012. The first draft of the Freedom and Justice Party’s law, presented in April 2012, was far more progressive on international organisations, for example, with no distinction between them and Egyptian groups in the law other than requiring international organisations to apply to the ministry of foreign affairs for registration.

“If President Mohamed Morsi and his Freedom and Justice party want to allow international organisations including human rights groups to continue to operate in Egypt, where they have worked for years, they could decide tomorrow to revert to the fairer previous language on international groups in their draft.” Whitson said.

Egyptian and international human rights organisations have unanimously criticised the draft law. The Forum of Independent Human Rights Organisations, a coalition of Egypt’s most active human rights groups, issued a joint statement saying that the proposed law would “stifle civil society.” In a March 28 news release, the United Nations special rapporteurs on freedom of association and human rights defenders warned the draft law would “ultimately impede associations from fulfilling their crucial function in the promotion and protection of human rights.” Amnesty International called the law “draconian” and UN High Commissioner for Human Rights Navi Pillay said it was a “blow to the hopes and aspirations that were raised during the 2011 ‘Egyptian Revolution.’”

“The extent to which a government allows for a healthy and critical civil society to operate freely is a test of its democratic credentials,” Whitson said. “Egypt should be empowering independent groups to help alleviate the impact of the worsening economic crisis and instead it is imposing even more control.”