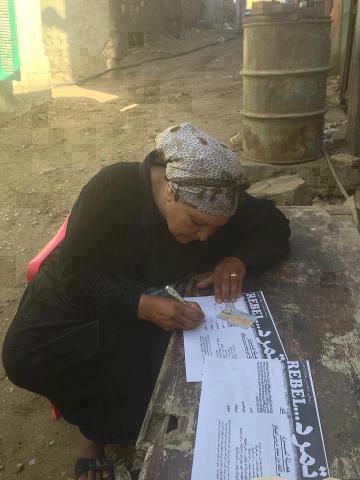 Six members of the Tamarod campaign were detained by campus security while distributing campaign applications at the University of Zagazig on Wednesday.

Tamarod, or “Rebellion”, is a petition campaign that was launched in late April to gather signatures withdraw confidence from President Mohamed Morsi.

Alaa Al-Din Awad, campaign coordinator in Sharqeya, said the members were forced to sign a document stating that they will no longer distribute campaign applications within university campuses. They were not released until they signed the document.

“We have a second and third line of struggle to work inside Zagazig University,” Awad said. “We will not stop distributing applications.”

This is the third time Tamarod members were detained while distributing campaign applications on or near university campuses.

The Supreme Council of Universities banned partisan activities on university campuses in March. The decision banned political parties from conducting any activities or distributing propaganda within universities.

“Sohag prosecution issued a decision allowing the distribution of Tamarod applications within campus,” Awad said. On Saturday, at least three campaign members were arrested outside Sohag University while distribution applications.

On Sunday, four campaign members were shortly held at a university security office at Cairo University after distributing applications. It was shortly after the campaign announced it had collected 2,029,592 signatures throughout Egypt.

Tamarod was launched two weeks ago by members of Kefaya movement. The campaign is aiming to collect 15 million signatures before 30 June, the day that will mark Morsi’s one year anniversary in power. It is also calling for early presidential elections.

Assem Abdel Maged, a member of the Al-Jamaa Al-Islamiya, launched Tagarod on Sunday to counter the Tamarod campaign by signing a petition to keep the “legitimately elected president in his post”.