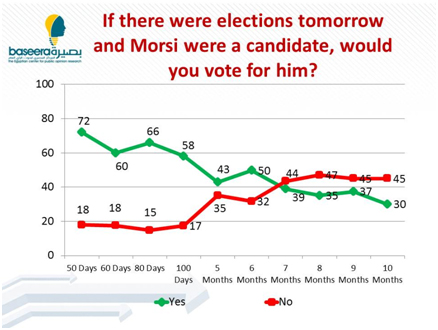 The latest public opinion poll conducted by The Egyptian Center for Public Opinion Research (Baseera) has revealed that Egyptians have continued to show dissatisfaction with President Morsy’s job. The approval rating has hit a record low, with only 46 percent of Egyptians saying they think he has performed well, slightly lower than the percentage observed in the last month poll which reached 47%. This approval rating is much far behind the percentage he earned after the first hundred days, when 78% of Egyptians said they approved of his performance.

The poll which was conducted at the end of April, 2013 showed a continuous decreasing trend of the approval rating. Furthermore, it is showing for the first time that the percentage of those who disapprove the president’s performance is becoming higher than those who approve his performance as president (47% vs. 46%).

Education level has an obvious impact on the Egyptians evaluation for the president’s performance. The approval rating was as low as 38% among Egyptians with university or higher education compared to 52% among Egyptians with less than intermediate education. The approval rating is also significantly lower in urban governorates (34%) compared to 41% in Lower Egypt and 58% in Upper Egypt.

Willingness to re-elect the President

The clear shift witnessed in the last month is the significant decline in the percentage of those who would vote for Morsy if presidential elections would be held tomorrow. The percentage declined to 30% compared to 37% at the end of his ninth month in office, and 58% after the first hundred days.

The percentage of those who would vote for Morsy if presidential elections would be held tomorrow is significantly lower in urban areas (23%) compared to 35% in rural areas. Clear differences are witnessed among the different regions as the percentage dropped to 19% in urban governorates compared to 26% in Lower Egypt and 41% in Upper Egypt.

According to the poll, more than one third of Egyptians have never heard of the National Salvation Front (NSF), the country’s main opposition coalition. This percentage didn’t witness a significant change if compared to the percentages observed in the last 2 months.

The survey was conducted using landline and mobile telephones, with a sample size of 2,202 respondents ages 18 or older nationwide. All interviews were conducted on Monday and Tuesday, 29 and 30 April 2013. The response rate was approximately 72%, and the margin of error was less than 3%. Income brackets were determined based on ownership of durable goods. For more information on the detailed findings and the methodology adopted, or to see the graphic presentation of results, please consult our website: www.baseera.com.eg