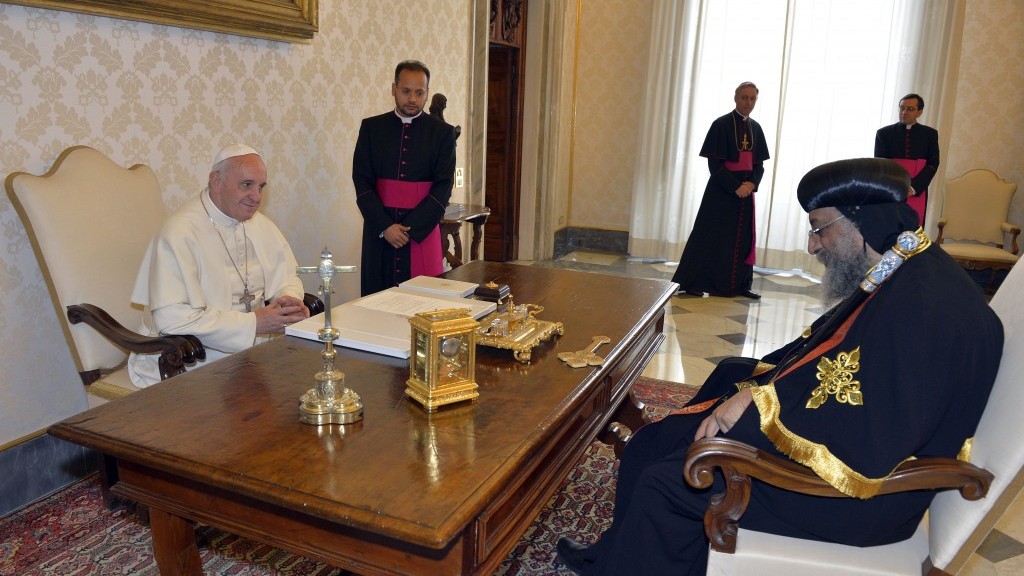 Head of the Coptic Orthodox Church Pope Tawadros II met with Pope Francis in the Vatican on Friday morning as part of a historic visit between the two institutions. The meeting was part of the commemoration of a memorandum signed between the churches 40 years ago when Pope Shenouda III visited the Vatican in 1973.

The two pontiffs met and exchanged gifts on Friday morning in Pope Francis’ library, along with delegations of bishops and cardinals from their respective churches.

Pope Tawadros arrived in Rome on Thursday, beginning a five day visit. Pope Francis received him at the entrance to Domus Sanctae Marthae, the Vatican’s guesthouse where the Roman pontiff has taken up residence since his ascension to the papal throne in March.

Pope Tawadros also visited the tombs of St Peter and St Paul during his visit. “For me it is a great joy and a truly graced moment to be able to receive you all here, at the tomb of Saint Peter, as we recall that historic meeting forty years ago between our predecessors…in an embrace of peace and fraternity, after centuries of mutual distrust,” said Pope Francis in his address to the Coptic Orthodox delegation.

Pope Shenouda’s visit in 1973, when Pope Paul VI received him, was the first of its kind in more than 1,500 years when points of contention surrounding the nature of Jesus arose in the Council of Chalcedon in 451, creating a schism that has lasted until today. Popes Shenouda and Paul signed a historic common declaration during the 1973 visit. The document highlights the important dogmatic commonalities between the two churches.

“We humbly recognise that our Churches are not able to give more witness to this new life in Christ because of existing divisions which have behind them centuries of difficult history,” reads the document. “In spite of our differences, however, we are rediscovering ourselves as Churches with a common inheritance.”

The declaration also announced the formation of a joint commission of representatives from both churches to conduct studies in church tradition, history, and theology.

Relations between the Coptic and Catholic churches improved after the 1973 visit. During his visit to Cairo in 2000, Pope John Paul II met with Pope Shenouda III.

Both popes have only recently become the heads of their respective churches, as Pope Tawadros is six months into his papacy and Pope Francis became the 266th Pope of the Catholic Church in March.