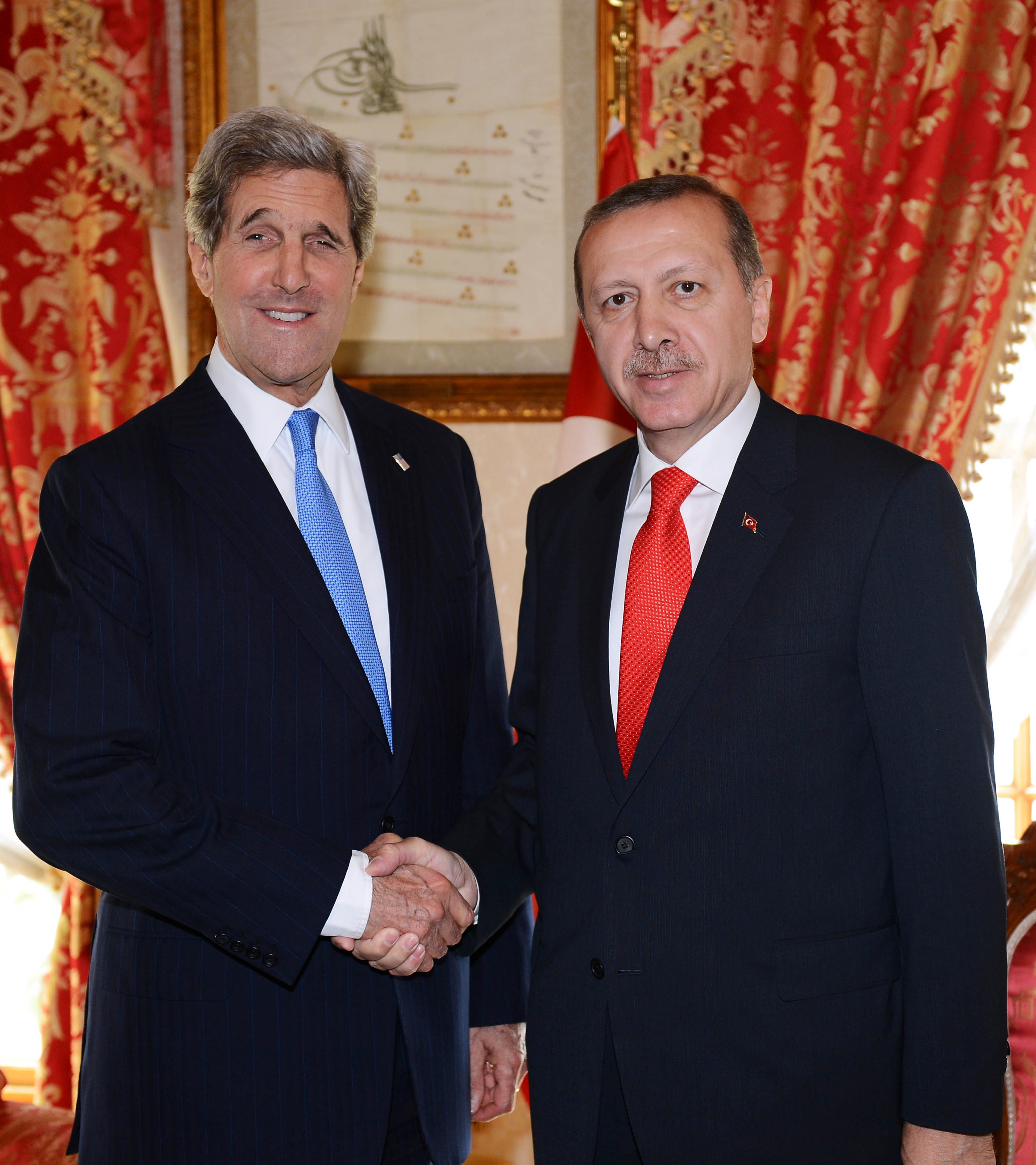 (AFP) – US Secretary of State John Kerry arrived in Turkey Sunday for key talks on Syria and the Middle East on a visit overshadowed by the killing of a young woman diplomat in an Afghan bombing.

The US foreign service employee, who Kerry met late last month when he visited Kabul, died Saturday in a roadside bombing attack of a NATO convoy in Zabul province which killed three NATO troops and two civilians.

“Our State Department family is grieving over the loss of one of our own, an exceptional young Foreign Service officer,” Kerry said in a heartfelt statement, condemning the bombing as “a despicable attack.”

Kerry was due to meet later Sunday with Turkish Foreign Minister Ahmet Davutoglu and Prime Minister Recep Tayyip Erdogan for talks set to focus on the burgeoning crisis in Syria and the Middle East peace process.

He would also “encourage Turkey to expeditiously implement its agreement with Israel and fully normalize their relationship to allow for deeper cooperation,” a top State Department official said, asking to remain anonymous.

Israel apologised to Ankara in late March for the deaths of nine Turkish activists in a botched raid by Israeli commandos on a Gaza-bound aid ship, in a breakthrough brokered by US President Barack Obama during a visit to Jerusalem.

The apology ended a nearly three-year rift between Israel and Turkey — two key US allies in the region — and the two countries are due to begin talks on compensation on April 12.

But they have yet to exchange ambassadors and fully restore diplomatic ties, and the US official stressed this “was a pivotal time to encourage them to keep moving forward.”

Erdogan accepted the apology “in the name of the Turkish people” but said the country’s future relationship with Israel would depend on the Jewish state.

Syria will also loom large in their talks, with Turkey having kept its borders open to refugees fleeing the conflict now in its third year.

Turkey has taken in some 190,000 refugees since the start of the conflict to topple President Bashar al-Assad, most of whom are housed in 17 camps stretched along the border with Syria, according to UN figures.

The huge flows are placing a massive burden on Turkish resources, and Kerry would stress the need to keep the borders open as well as their shared support for the Syrian opposition council, the official said.

After talks in Turkey, Kerry heads later Sunday to Israel and Ramallah in the West Bank, where he will meet with Palestinian president Mahmud Abbas.

He will also meet with Israeli Prime Minister Benjamin Netanyahu on Monday, in what will be his third trip to the Middle East region since the start of his tenure on February 1.

US officials have said the return visit will give him a chance to probe possibilities for restarting the moribund peace process, which has stalled for over two years, in the wake of Obama’s trip last month.

Kerry’s departure for Istanbul was delayed by about three hours when a door on his Boeing 757 malfunctioned, and he was visibly saddened by the tragedy in Afghanistan as he waited with his wife Teresa Heinz Kerry for a second plane to be prepared.

The Zabul bombing comes almost exactly seven months after ambassador Chris Stevens and three other American staff were killed in a militant attack on September 11 on the US embassy in Benghazi, Libya.