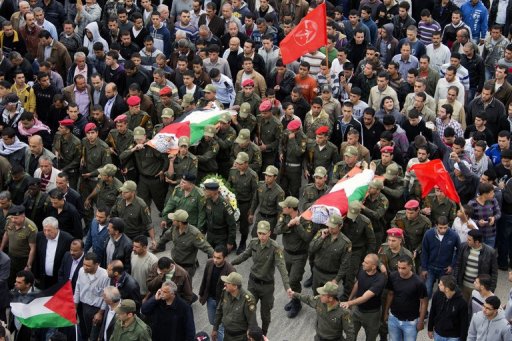 By Samih Shahine (AFP) – HEBRON, Palestinian Territories — The West Bank simmered with anger Thursday as thousands joined the funeral of a prisoner who died in an Israeli jail and similar numbers gathered to bury two teens shot dead overnight.

Furious crowds lined the streets of the southern city of Hebron to pay their respects as the cortege carrying the body of 63-year-old prisoner Maisara Abu Hamdiyeh passed by en route to a local mosque before being buried, an AFP correspondent said.

Abu Hamdiyeh, who had served 10 years of a life sentence for attempted murder, died of throat cancer on Tuesday in an Israeli hospital, sparking tension on the Palestinian street, with the leadership blaming Israel for medical negligence.

As news of the prisoner’s death spread, protests erupted in several places, quickly turning into clashes with the Israeli army, notably in Hebron, Abu Hamdiyeh’s hometown.

Near the northern village of Anabta close to Tulkarem, the clashes turned deadly, with two teenagers shot dead overnight by troops, Israeli and Palestinian sources said.

Palestinian security officials said Amer Nasser, 17, was killed by a bullet to the head and Naji Balbisi, 19, whose body was discovered at dawn, was shot in the chest.

The Israeli military said troops had opened fire at “rioters who hurled petrol bombs” at a military post.

His remarks come just days ahead of a visit by US Secretary of State John Kerry, who intends to revive the stalled Middle East peace process and will hold fortnightly meetings with Israeli and Palestinian leaders, according to local media.

In Anabta, where schools and shops were closed in mourning, around 6,000 people gathered for the funerals, with many calling for revenge as the two bodies arrived, both wrapped in Palestinian flags, an AFP correspondent said.

Speaking to AFP, Maath Kanaan spoke bitterly about the loss of his friend Amer.

“He always had a nationalist spirit and he was the first one to go to demonstrations. They killed him in cold blood,” he said.

The army confirmed the fire but could not say whether it was a mortar round or rocket, although it caused no damage or casualties.

Since news of Abu Hamdiyeh’s death emerged, Hebron has been wracked by clashes between stonethrowing youths and Israeli troops, and since Tuesday the city has been shut down for a three-day general strike in a show of mourning.

Wednesday, 4,600 prisoners in Israeli jails went on a one-day hunger strike, with another 1,900 refusing their breakfast again on Thursday, the prisons service said.

The issue of Palestinians jailed by Israel is highly sensitive, and frequently sparks mass demonstrations across the territories that often flare into violent clashes with the military.

The Palestinian leadership has accused Israel of medical negligence in Abu Hamdiyeh’s death, despite moves by the prison service to secure his early release on compassionate grounds.

In Gaza, Salafist militants have fired a handful of rockets over the border in protest, prompting a retaliatory air strike and a warning from Defence Minister Moshe Yaalon that Israel would not tolerate attacks on its territory.

Prime Minister Benjamin Netanyahu also warned that if an existent truce in and around Gaza was violated, Israel would “respond forcefully.”

In a separate development, Israel has reportedly deployed a fifth battery of its vaunted Iron Dome anti-missile system in the southern city of Eilat, due to fears of rocket fire on the Red Sea resort.

Abu Hamdiyeh was jailed for life in 2002 on charges of attempted murder in connection with a failed bombing attack on a Jerusalem cafe. He had served 10 years of his sentence when he died.