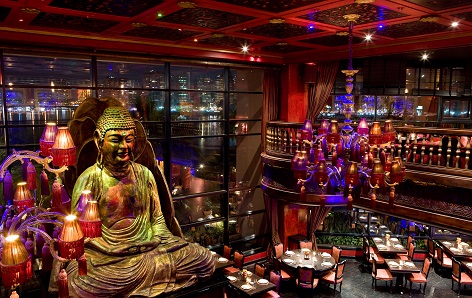 Whenever I am dining out my first eating choices are usually Japanese, Indian and Chinese in no particular order. Who does not like a touch of the Orient or its mystery? And nothing really says “the Orient” like the Buddha Bar in the Sofitel Cairo El Gezirah.

The hotel itself is a pleasant surprise, an oasis in the middle of urban Downtown Cairo filled with soothing candlelight, elegant, exquisite flowers and scents. But that is a story for another day; I am here to talk to you about the food!

My companion and I arrived at the restaurant on a Wednesday at 8.30pm and were shown to a table with an incredible view of the Nile. The trees were dancing in the wind and a lonely felucca was floating by.

From where were sat we could see the lights of Downtown Cairo glittering in the distance. The lighting inside the restaurant itself was turned down, relying mainly on the candles on each table; on the whole, the ambiance was romantic.

Our waiter asked us if we would like to drink something and we both had a striking cocktail called Grab the Grapes which was, in my opinion, very refreshing. The sweetness of the fresh grapes, the gentle but distinct notes of vanilla, the acidity from apples and the surprising explosion of fresh mint were very invigorating. Not being much of an alcohol drinker I had the virgin version, but all the cocktails have their alcoholic adaptations as well. My companion, however, found it to be a bit too sweet for her palate, but she did enjoy the mint flavour.

Our meal was a journey to many different regions of Asia; we ordered sushi, Won Ton soup, Chinese chicken salad, shrimp tempura, noodles and spring rolls. We started our meal with the sushi. It was beautifully presented on a platter. The ingredients were fresh and the rice was perfectly cooked, it was not soggy or sticky.

Then came the Won Ton soup. The flavour of the shiitake mushrooms was earthy and strong, but not overpowering, the chicken dumplings were cooked well, and the coconut milk added a rich creamy flavour to the rest of the unusual and delicious flavours it contained.

The salad was crispy, nutty and sweet. The chicken was cooked well, and they had added Nigella Sativa to the dish which was an extra contribution to this very unique combination of flavours.

We all know that there is nothing like a classic favourite, and shrimp tempura is just that! It was crisp and hot off the stove, the taste was subtle, but just right; the crispy coating on the outside and the soft, fragrant shrimps on the inside.

The noodles were very much your basic fried noodles. They boiled them first and then stir-fried them in sesame oil with cabbage, bell peppers, shiitake mushrooms and a splash of oyster sauce. It was quite good, but not really to my taste. However, my companion loved it and she finished it all.

During our meal Chef Avelino Silveza came to our table to enquire how we were enjoying our dinner. He was friendly and helpful, explaining how each dish was prepared and pointing out the different ingredients he used. Chef Silveza has spent almost half his life in the Japanese and Asian kitchens. A world traveller, he has been in Egypt for ten years and acknowledges that he loves it as he does his own country.

By the time I had a spring roll I was already bursting at the seams and could not even think of ordering desert. And even though my friend was full, she decided to go ahead and order a lemon sorbet. She described it as being the best that she has ever had. It was cool, refreshing, tangy and sweet all at once, garnished with toasted grated coconut and pistachios, giving it the most delightful exquisite additional flavour.

We finished off our meal with espresso, the perfect finale for the perfect meal. Even though I was full, I still felt light when we got up to leave, which is not usually the case after I indulge in the cuisine of the Far East. I decided to thank each of the staff individually for their attentiveness and for the delightful dining experience they gave us. I am sure that I will go back to the Buddha Bar again; for the romantic ambiance, friendly, attentive staff and the wonderful food.