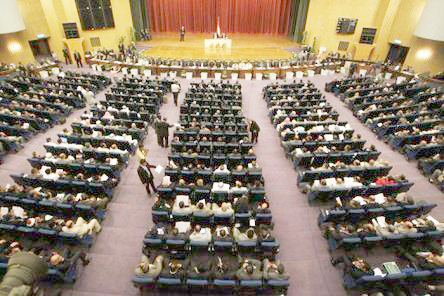 The Shura Council Committee for Constitutional and Legislative Affairs agreed to amend the boundaries of some electoral districts on Sunday.

The committee agreed to combine certain districts with the aim of making the electoral system fairer. The re-drafting of the districts was one of five issues in the draft electoral law that the Supreme Constitutional Court (SCC) deemed to be unconstitutional.

The committee also approved a request made by Tariq Mahdi, an Al-Nour party representative on the committee, to redistribute the Cairo district by combining a number of different areas into five separate districts.

Ahmed Hafez, of Shayfeencom, said on Monday that the movement is aware of the council’s decision and its legal team is studying the changes.

“Usually when changes are made to boundaries it usually goes in favour of the ruling party,” Hafez said. He pointed out that during the run-up to the last parliamentary elections the areas of Boulaq and Zamalek were combined and this resulted in a favourable result for the Freedom and Justice Party (FJP).

Under the current constitution, Egyptian law governs the process of setting electoral districts. However, according to Article 49 of the constitution it is the responsibility of the state to secure “the safety and neutrality of the elections”.

The electoral law was amended following the SCC’s rejection of the law. Although, following the amendments the council did not send it to the SCC again, instead sending it directly to President Mohamed Morsi, who approved the law and called for elections. The administrative court then suspended the elections and referred the law to the SCC once more.

Members of the Islamist-dominated Shura Council Committee on Human Rights met on Sunday and approved “in principle” a draft law regarding demonstrations. Ezz El-Din El-Komy, a member of the committee said: “They are working on preparing a report on the law to be discussed in the plenary session tomorrow (Tuesday).”

The committee has had some differences of opinion during the drafting of the law, with FJP members encouraging the committee to push the law through quickly and members of the Al-Nour Party calling for prudence on the matter.

Some committee members, including Saleh Moussa and Adel Afifi, called for the law to include a ban on protesting outside places of worship. Afifi denounced recent protests outside Morsi’s home and added: “A good protester would be the first to accept the law but thugs and counter-revolutionary advocates that promote violence will not agree with it.”