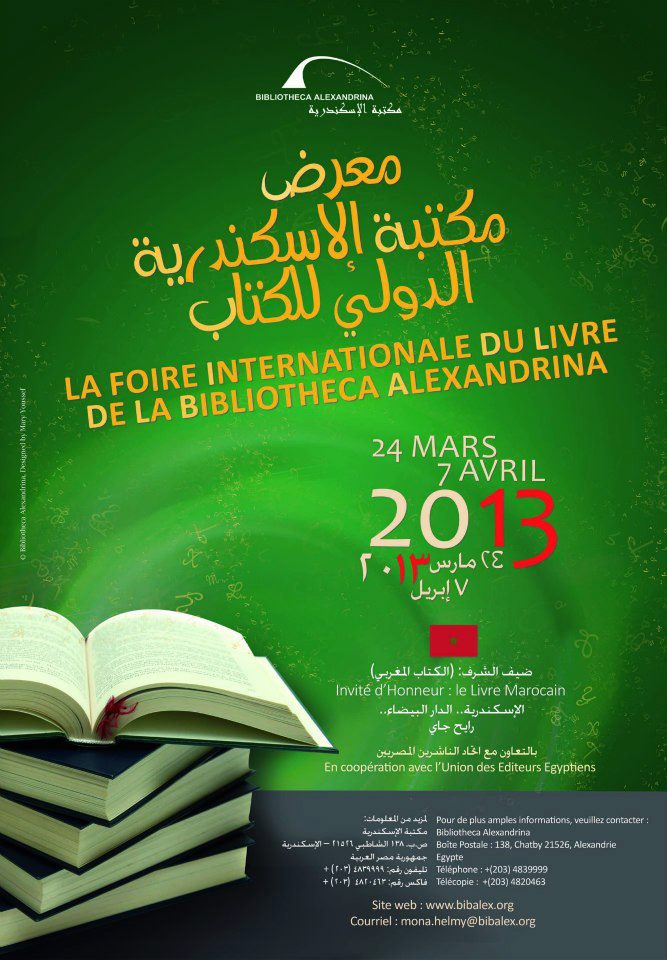 We are all familiar with the annual book fair in Cairo, which takes place at the start of every year. However, if that is the only book fair you’re aware of, then you have missed out on a great event for booklovers. Alexandria has been holding a book fair of its own for nine years now. Every year Alexandria’s main cultural attraction, the Bibliotheca Alexandrina, organises the book fair which includes exhibits from publishers from all over Egypt, the Arab world, and Europe.

The book fair began on 23 March and will continue until 7 April. The Egyptian Publishers Union is responsible for organising the book fair, along with Bibliotheca Alexandrina. Over the years the fair has adopted different themes to highlight a specific form of writing or a country. In 2013 the spotlight is on Moroccan books.

According to the website, the book fair is held to accomplish the Library’s mission: “This is in line with the Bibliotheca Alexandrina’s mission to raise awareness among all members of society, specifically the youth; to promote the needful impact of reading for different generations and create opportunities for dialogue between publishers, readers and writers.”

According to the fair’s Facebook event, Bibliotheca Alexandrina’s Special Projects Manager Dr Khaled Azab said: “130 publishers are expected to participate in the book fair this year. In addition, it will include a large number of cultural events.”

He added that the Book Fair is growing and developing every year, pointing out that during its eighth year the fair hosted France and Mauritania as honorary guests, and about 100 publishers were included from 12 different countries. The book fair will also host 44 book signings and lectures.

He said that this year the exhibition will present all that is new in the world of publishing, whether it is electronic publishing or printed publishing. In addition, the fair will include a selection of lectures and get-togethers to facilitate communication and enrich cultural life in Egypt and the Arab world.