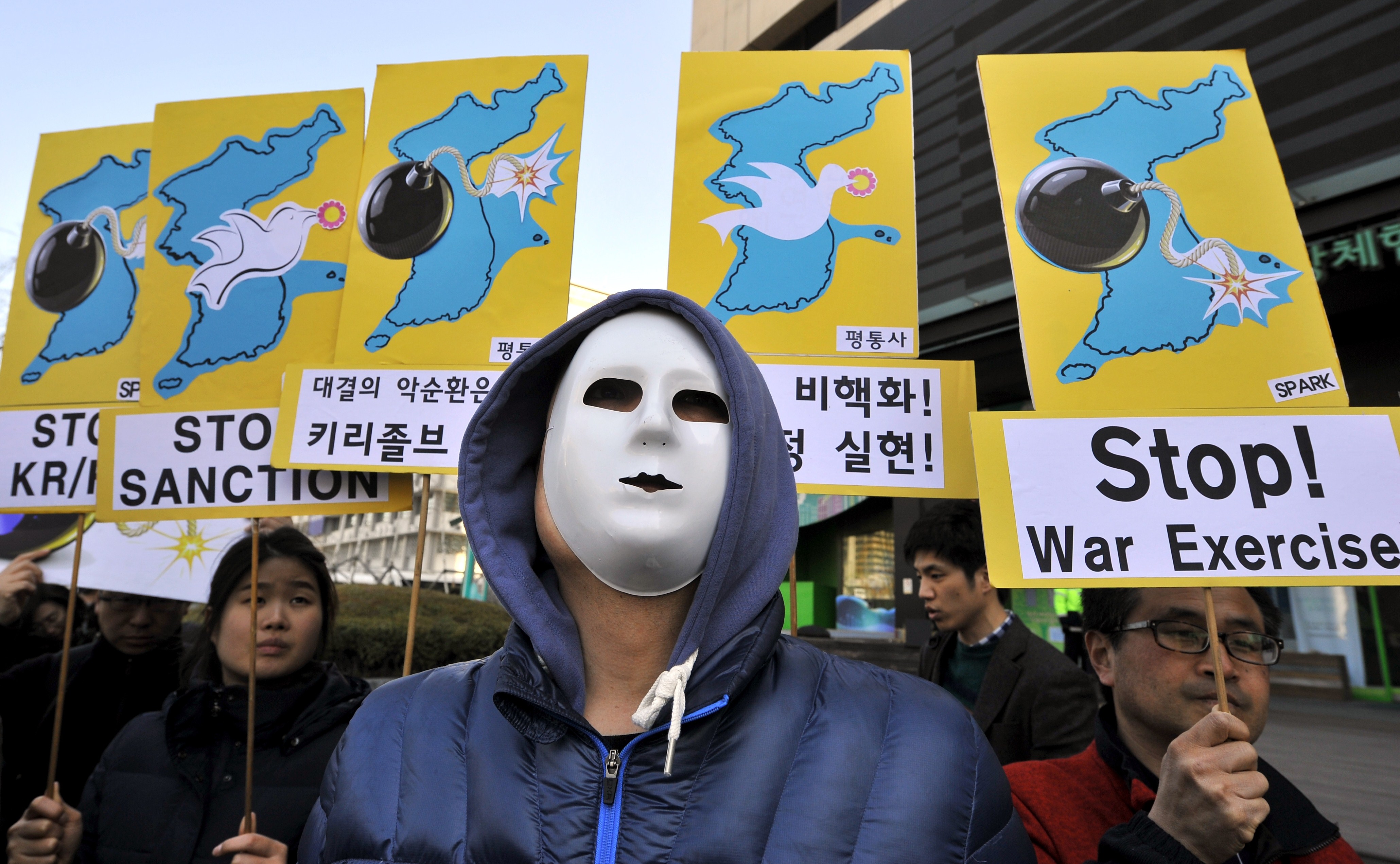 The start of the two-week “Key Resolve” exercise follows a week of escalating tensions on the Korean peninsula, with North Korea also threatening nuclear war over UN sanctions adopted after its third atomic test last month.

Pyongyang has condemned the annual joint manoeuvres as a provocative invasion rehearsal and announced that — effective Monday — it was scrapping the 1953 armistice and voiding non-aggression treaties signed with the South.

The South’s Unification Ministry confirmed that the North appeared to have carried through on another promise to cut a telephone hotline between Pyongyang and Seoul.

“The North did not answer our call this morning,” a ministry spokeswoman said. The hotline was installed in 1971 and the North has severed it on five occasions in the past — most recently in 2010.

In a dispatch late Monday from its official news agency KCNA, North Korea restated its view that the armistice, “which has existed for form’s sake, would be completely invalid from 11 March”.

The US-South Korean wargames are “bringing the dark clouds of a nuclear war to hang over the Korean peninsula”, KCNA added, while vowing that North Korea’s armed forces were ready for an “all-out action”.

Rodong Sinmun, the newspaper of the North’s ruling communist party, said that with “the ceasefire agreement blown apart… no one can predict what will happen from now on”.

Voiding the armistice theoretically paves the way for a resumption of hostilities, as the two Koreas never signed a formal peace treaty and remain technically at war.

“The North is giving the impression it wants to put things back to where they were 60 years ago,” said Yang Moo-Jin, a professor at the University of North Korean Studies in Seoul.

Experts point out that North Korea has declared the ceasefire dead or obsolete nearly a dozen times in the past 20 years.

On the last occasion in 2009, the North specifically said it would no longer guarantee the safety of US or South Korean naval vessels operating near the disputed maritime border.

Sabre-rattling and displays of brinkmanship are nothing new in the region, but there are concerns that the current situation is so volatile that one accidental step could escalate into serious confrontation and conflict.

Having issued so many dire warnings, the North will feel obliged to take some provocative action, observers say. Yang predicted short-range missile tests or an incursion across the sea border.

The analyst said he found it “particularly alarming” that North Korea’s young leader Kim Jong-Un appeared content to act with no concern for the response of ally China — widely seen as losing patience with its volatile neighbour.

“Key Resolve” is an annual, largely computer-simulated exercise, but still involves the mobilisation of more than 10,000 South Korean and 3,500 US military personnel. About 28,500 US troops are stationed in South Korea.

The South Korean Defence Ministry says North Korea is expected to carry out its own large-scale military drill along its eastern front this week, involving the army, navy and air force.

The North’s foreign ministry has already warned that a second Korean War is “unavoidable” and threatened “pre-emptive nuclear attacks” on the United States and South Korea.

The North is not seen as having the ability to deliver a nuclear warhead to the US mainland.

South Korea, which usually shrugs off Pyongyang’s fiery rhetoric, has promised to retaliate to any provocation with a precision strike on the North’s leadership command.

The surge in tensions is an early challenge to South Korea’s new President Park Geun-Hye, who was only sworn in two weeks ago and is still without a confirmed defence minister, national security adviser or intelligence chief.