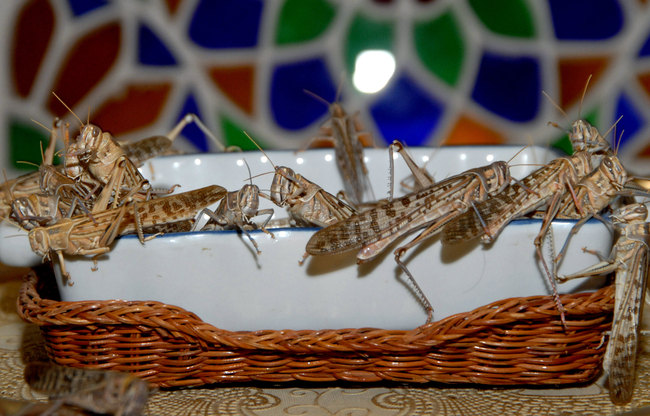 Salah Moawad, head of the agricultural services sector at Egypt’s Ministry of Agriculture, made a public statement four days ago denying news that swarms of locusts have caused damage to crops. “The current inspection teams at areas targeted by locusts did not witness swarms damaging a single inch of crop till now,” he said.

Moawad added that the swarms spotted until now are “sexually immature and do not depend on plants for energy since they mainly rely on fat stores”.

He said that the insects store the necessary fats for over a week in order to remain light.

However, another report by the UN Food and Agriculture Organisation (FAO) said that the Egyptian Ministry of Agriculture conducted operations to clear out land threatened by locusts, removing 11,000 hectares of land.

“The locusts are merely storing fat on their bodies while they go on their spring migration outside of Egypt,” Abdel Momen said in a televised statement.

“This phenomenon occurs every year, and inspection teams are always present in areas targeted to observe and report,” he continued.

He praised efforts made by inspection teams deployed in the areas plagued by locusts, and doesn’t expect the phenomenon to reach Cairo.

“Our plans to combat the locusts have been successful on the borders so far, there shouldn’t be a reason to worry about Cairo.”

An update on mobile and internet traffic alert website, Bey2ollak, claimed earlier today that swarms of locusts had been spotted in New Cairo, in the Tagammu’ Al-Khames area, on the outskirts of the city.

A one-tonne swarm of locusts is capable of consuming “the same amount of food in one day as about 10 elephants or 25 camels or 2,500 people” said the FAO.

“If additional rains fall and conditions remain favourable, a second generation of breeding could occur,” in continued in an online statement.

Abdel Momen denied the news after meeting with President Mohamed Morsi last Thursday to discuss plans to combat the locusts.

He stressed that the ministry of agriculture “would be able to manage the locust swarms, which are currently present in Aswan and Qena, headed toward Sohag”.

Agriculture authorities and Ministry of Defence officials are cooperating to prevent any swarms from spreading into farmlands in the Nile Delta.

Teams have been deployed in affected areas to spray insecticides to damaged lands.

Abdel Momen, however, added that “it is difficult to predict the insects’ migration patterns”.

Despite difficulties in extermination, Moawad informed the media that “80% of locusts have been killed and were eradicated in 17 areas across four governorates”.

He said that the Egypt-Sudan borders and the Red Sea Coast are currently heavily inspected, in order to prevent locusts from reaching agricultural areas in the Delta and Nile Valley.

Locust control teams were sent to areas affected after they were seen 57km north of the city of Marsa Alam.

Around 3.6 million hectares of agricultural lands are at risk of being invaded by the swarms.

The FOA has described the situation as “threatening”.

The swarms originated from the winter breeding areas on the Red Sea coastal plains and subcoastal areas in northeast Sudan and southeast Egypt, the FAO reported in January.

In an attempt to help citizens with the situation, Moawad called on Egyptians to “stop burning tires and plastic to ward off locusts”.

He explained that such measures lead to their spread to other areas.

He advised Egyptians to immediately report to the authorities should they spot any locusts around.

“Locusts can fly great distances, which makes it difficult to exterminate the destructive pests once and for all,” said Moawad to the media last week.

They can extend to over 60 countries “covering about 29 million square kilometers, or about a fifth of the world’s land”, according to the FAO.

Reports of the locust invasion were spread last November when the Ministry of Agriculture declared a state of disaster in Aswan as locusts were sighted in Lake Nasser, the Eastern Desert, Hurghada, Shalateen, Sheikh al-Shazly, and others.

A similar situation took place in 2004 when Egyptian farmers in 15 governorates experienced crop damage due to a locust plague.