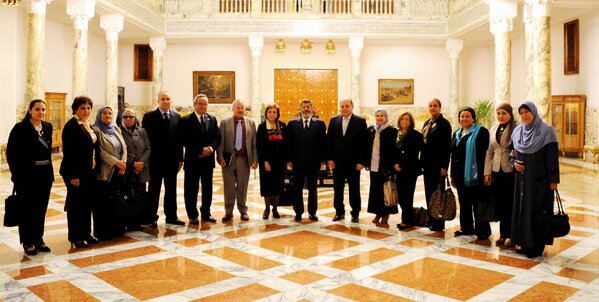 The National Council For women (NCW) has released details of a new law to address violence against women. The law is being drafted with cooperation from civil society organisations, according to the NCW.

Representatives of the NCW met with President Mohamed Morsi on Thursday to discuss some of the challenges currently facing Egyptian women.

The meeting comes at a time when the group is drafting a new law, with the help of civil society organisations “to address all manifestations of violence against women, whether at work, the street or at home”. This was announced in an NCW press release on Thursday, which also reported that the Council was instructed to draft the law by Prime Minster Hesham Qandil.

The NCW draft law is expected to include three chapters, said the press release. The first defines the different forms of violence women can be subjected to, “such as denial of inheritance, circumcision, trafficking, forced marriage and the improper use of women’s bodies in advertising”.

The second chapter is expected to define different forms of sexual violence or harassment. This section will also include provisions to ensure “the perpetrator of the crime is severely punished”. This will include the possibility of the death penalty “according to the circumstances of the case and the number of perpetrators”.

The third chapter will contain “provisions for the necessary efforts to be undertaken by the state to encourage the victim to report the incident”. This includes protection for the victim as well as the provision of any necessary rehabilitation services.

A statement published on Thursday by the presidential spokesperson reported that the NCW and Morsi “discussed the challenges facing Egyptian women and ways to overcome them, and the importance of joint efforts to promote the role of women in society”.

According to the presidential statement Morsi demanded the development of “a code of honour” for women in Egypt which “defines a basic framework for the advancement of women’s role in society”.

President of the NCW Mervat Al-Tallawy outlined the council’s plans for the future. According to the presidential statement these plans include, “the development of Egyptian women’s skills, investment capacity of women, poverty reduction, providing legal and social protection and the political and social empowerment of women”.

Al-Tallawy also invited Morsi to a celebration of women, which the NCW has organised to take place in March.

Morsi also met with the Egyptian delegation for the upcoming 57th session of the United Nations Commission on the Status of Women (CSW). The session is scheduled to start on 4 March and will continue until 15 March at the UN headquarters in New York. The presidency confirmed that Egypt’s speech will be delivered by Morsi’s assistant for political affairs, Pakinam El Sharkawy.

The president “stressed the importance of effective and positive participation of the Egyptian delegation” at the session and to “convey the true image of Egyptian culture and traditions”.