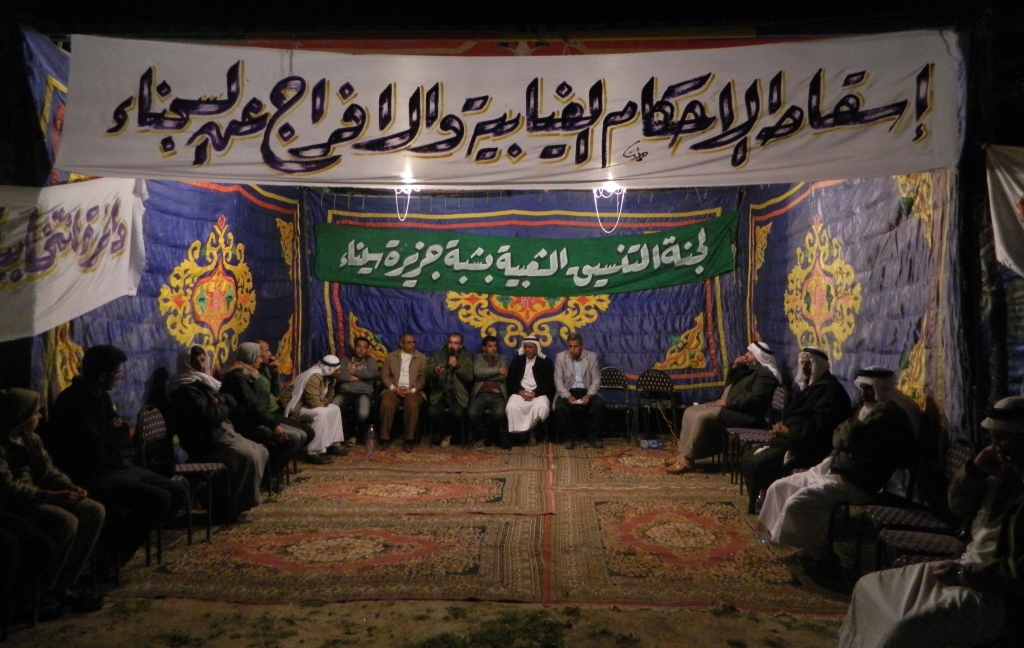 A sit-in began on Tuesday night in the city of El-Sheikh Zuweid in North Sinai calling on the city’s residents, along with those in Rafah and Central Sinai, to protest for 10 days in hopes that their demands would be heard and brought before President Mohamed Morsy.

The sit-in was held in a public park in one of the city’s squares, and was attended by dozens of tribesmen and political activists.

Abd Al-Qadr Mubarak, a coordinator of the sit-in and member of the Al-Suwarka tribe, stated that the protest would last 10 days and present a total of 10 demands.

Mubarak stated that the people of Sinai have been systematically marginalised, repressed, and exposed to the most brutal conditions for over 30 years.

According to Mubarak, they have been packed into prisons and tortured by executioners of the former regime which has discriminated against from court rooms in Cairo. He accused the regime of haphazardly accusing all those who live in Sinai of acts of criminality, while those who live in the region stand idly by as their rights are trampled upon.

Hussayn Al-Qayem, a political activist in El-Sheikh Zuweid, stated that as long as the regime continues to ignore their demands, then the response will be painful.

Muhammad Al-Mani’i, a tribal leader in the region, criticised the government’s policies towards Sinai saying that they are designed to isolate the peninsula from the rest of Egypt.

Abd Al-Hadi I’tiq, a tribal leader in the area, said that it was time to start involving the people of Sinai in the politics and decision-making processes of the region. He called on tribesmen to reconcile their differences and unite behind their demands.

Mustafa al-Atrash, a political activist, said that what was important was not so much who ruled Egypt but rather the extent to which they concerned themselves with issues related to Sinai. He went on to say that Egypt’s current regime was corrupt and that it would not bring justice to the region, as this went against Israel’s interests.

Mustafa Singer, a journalist and political activist, said that Sinai has remained a marginalised issue for the last 60 years. He added that throughout this period the people of the region have struggled for recognition of their rights, and would continue to do so until those in power took notice.

The protester’s demands included repealing all decisions preventing the people of the region from owning land including Law 203, putting forward a timeline for reform of the region’s service facilities, demanding justice in the distribution of government jobs, rights for Sinai prisoners in Israel, a development plan for the region, minimum wage for all workers, the establishment of election polling stations on the region’s eastern border and in Central Sinai, and full sovereignty for the armed forces operating in the region.

The defects in Egypt’s decision-making processes