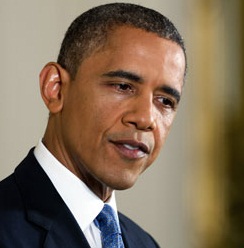 A statement released by the White House on Tuesday reported that Obama’s conversation with Morsi was “to reaffirm the US’ strong commitment to the Egyptian people as they continue their transition to democracy.”

Obama also “welcomed President Morsi’s commitment to serving as a President for all Egyptian people.” This is a sentiment that Morsi has stressed recently amidst a climate of political uncertainty and a tirade of criticism from opposition groups.

The US president called on Morsi and political groups “to work to build a consensus and advance the political transition.”

The Egyptian presidency reported on Tuesday that during is conversation with Obama, Morsi “stressed the desire of the Egyptian people to complete the democratic transformation and move forward in building a strong and stable, modern Egyptian state.”

Morsi also “confirmed the importance of building a strategic partnership… built on the base of mutual respect and common interests.”  The presidency also reported that Obama is looking forward to Morsi’s visit to Washington this year.

The two presidents also discussed regional issues, especially Egypt’s role in maintaining the Gaza ceasefire agreement between Hamas and Israel. The Egyptian presidency reported that Obama “stressed that the peace process cannot move forward without the active participation of Egypt.”

Obama also mentioned that new US Secretary of State John Kerry is expected to arrive in Cairo on 2 March as part of his diplomatic tour around Europe and the Middle East, which began on 24 February.

Earlier in February a US state department official said during a visit to Cairo that “sustainable democracy is more than just elections. There needs to be rule of law, official accountability and transparency, rights of women, freedom of the press and many other things.” US ambassador to Egypt Anne Patterson, also speaking early in February, said that Egypt “needs much more” to complete its democratic transition.