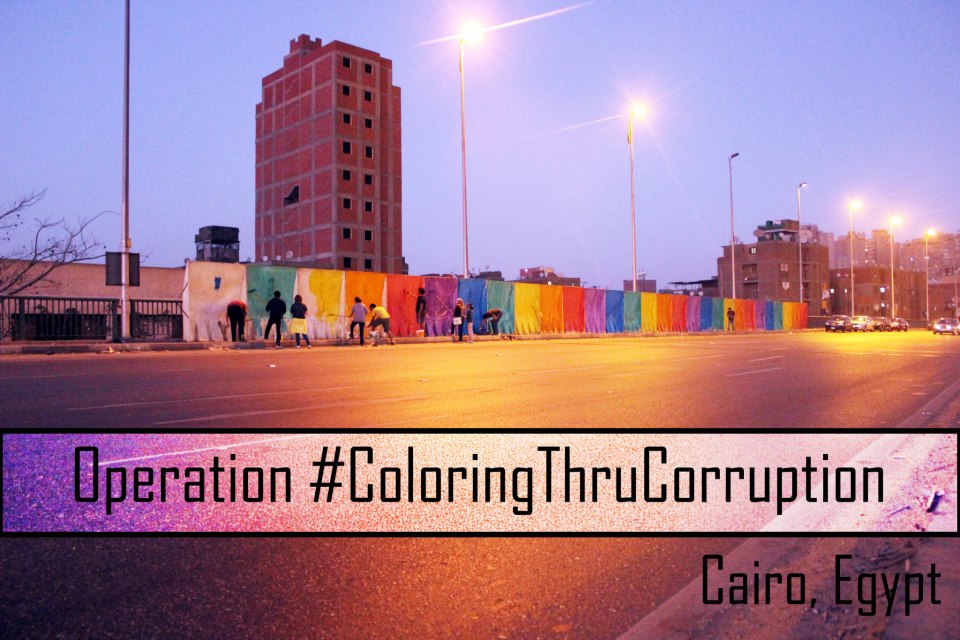 While most people colour streets and pavements to beautify local neighbourhoods, one group of street artists are doing the opposite. Street art has seen an overwhelming surge in popularity after the revolution with graffiti of political slogans and powerful images painted on every street corner.  However, a group of street artists are using colour to reshape the minds of Egyptians.

Every once in a while the #ColoringThruCorruption hashtag explodes with tweets about their recent project. We managed to contact one of the artists involved in the project, but he wanted to remain anonymous. “We did it [the project] together, and I do not like to speak of it as mine,” he said. The group colours everything: walls, water pipes, and even temporary plastic fences on the ring road.

They take the project so seriously that they have dubbed it an operation, with one artist tweeting: “Operation #ColoringThruCorruption is up and running.” The project is quite altruistic; the artists spend their own money to purchase the colourful paint and equipment. And in addition to that, they exert a tremendous effort in planning and execution.

“We are not here to beautify the ring road and make it nice and pretty. We want you to pay attention to the reality of the situation,” said one of the artists. The group wants people to realise the dire situation that the government is putting them in: “You are being robbed. Every year when you go to renew your driver’s license you pay money for fines and for the renewal of roads, facilities and bridges. This money goes into private boxes and makes its way to governors and local councils.

In the end your car is wrecked by the potholes in the road, which [are big enough to] break cars and swallow whole human beings,” one of the artists said, adding a heart-breaking note: “This is our shameful reality.”

Obviously the group is passionate about what they do. “It is amazing what a group of enthusiastic cultural agents are capable of doing when working for one cause,” said the artist. The group has put up a Google document for people to add their contact details so they can be notified of the time and place of their next “operation”. “I salute everyone who took part in this. We will notify you of the next destination as soon as we set our minds to it. Until then, fill in this form if you are interested in joining and pass it on to your friends. Spread the cause,” urges the artist on his Facebook page.

The group of young artists face the dangerous conditions of the Cairene streets when they add their colours to draw attention to corruption. As they turn more sites in Cairo into illegal riots of colour, they hope that those in power will get the message.