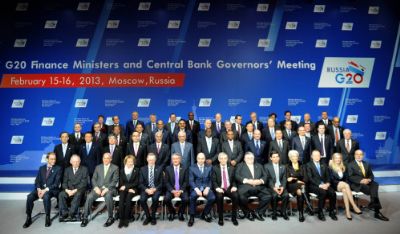 The turbulent period witnessed by the global currency markets is probably coming to an end, according to a G-20 statement issued Saturday.

G-20 finance ministers and central bankers vowed not to engage in “currency wars”, the targeting of exchange rates in a bid to achieve a competitive advantage.

However, the representatives of the 20 nations gave Japan the green light to devalue its currency in order to stimulate growth.

The term “currency war” was coined by Brazil’s finance minister in 2010 to describe measures taken by the United States Federal Reserve to devalue American dollars.

The “war” is not likely to impact, at least negatively, the Egyptian economy, say experts. The devalued Egyptian pound and current consumer attitudes give the local economy a resilient character, they added.

“The Egyptian currency has been the third-worst performer in the world,” said financial analyst Ahmed El-Oteify. “In the last three months, the Egyptian pound went down by around 5% to 6% against the dollar.”

“We are an importing country,” explained El-Oteify. “We won’t be impacted directly, unless China decides to further devalue its currency; this will reflect positively on the Egyptian economy because we mainly import from China.”

Essam Mostafa, vice chairman of Premiere Securities, said that the actual currency war is not a speculations war; it is, rather, a war against the global recession that hit the United States, Europe and Japan, and began to affect China’s growth rate.

China used this mechanism as a way to stimulate demand, according to Mostafa. Meanwhile, Egypt is facing a state of stagflation, a combination of stagnation and inflation. The consumer is also under income cut pressures, and prices are increasing on the back of the rising exchange rate, he added.

Mostafa said Egypt won’t assume the consequences of this war because the declining Chinese currency will be compensated by the rising American one; it may, however, help alleviate the inflation rate.

The analyst said that Egyptians are more likely to be affected by the decrease in purchasing power. He explained this by citing the low income turnover which results from lower governmental expenditure, altering consumer habits, as well as the unclear future projections for the country.

Mostafa expressed some optimism, however, claiming that all these symptoms can be quickly reversed once political and economic stability are achieved.