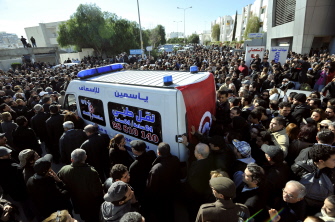 AFP – A large crowd of protesters gathered outside the interior ministry in central Tunis on Wednesday to denounce the murder of leftist opposition leader Chokri Belaid, AFP journalists reported.

The demonstrators, numbering at least 1,000, shouted slogans against Ennahda, the ruling Islamist party, and sang the national anthem outside the ministry on Habib Bourguiba Avenue, epicentre of the 2011 uprising that ousted ex-dictator Zine El Abidine Ben Ali.