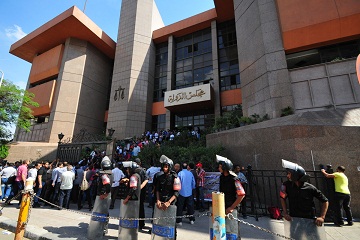 The Judges’ Club announced its disapproval of Prosecutor General Tala’at Abdallah’s decision to rescind his resignation. In a press conference at the club headquarters, chairman Ahmed Al-Zend said that the recent decision to go back on the resignation made things more “complicated” as the club said it did not accept Abdallah, who was appointed by President Mohamed Morsy last month, as the prosecutor general.

Al-Zend stressed that he interpreted Morsy’s decision to appoint a new prosecutor general as illegitimate, saying no judicial decision could be made outside of the judiciary.

“The constitutional declaration was wrong, and the ousting of the former Prosecutor General [Abdel Meguid Mahmoud] was wrong,” said Al-Zend.

He declared that Egypt’s judiciary is a “beacon” that works for the Egyptian people and would continue to do so even if the current impasse lasts “100 years.” He and other members of the Judges’ Club declared it would continue to do its work despite receiving multiple threats over the past weeks.

“The people and judges will remain as one,” he said.

Central Security Forces increased security at the High Court and heavily guarded the premises of the Judges’ Club during its press conference as anti-Morsy protesters demonstrated outside.

Members of the Judges’ Club, including Al-Zend, went to the High Court down the street from their headquarters and stood on the front steps to publicly declare their disapproval before reconvening at their headquarters for the press conference.

Earlier that day, lawyers from the Muslim Brotherhood and supporters of Abdallah demonstrated at the High Court in front of Abdallah’s office in an expression of support for his legitimacy and the legitimacy of the constitutional referendum, which was boycotted by a large faction of the judiciary.

Dozens of prosecutors marched to Abdallah’s office at the High Court building in downtown Cairo last Monday, demanding his resignation. He submitted his resignation to be considered by the Supreme Judicial Council (SJC) later that evening, a decision met with approval by members of the Judges’ Club and other prosecutors who had participated in the sit-in at Abdallah’s office.

However, Abdallah reversed his decision to resign on Thursday, saying that succumbing to such a decision under pressure would set a bad precedent. Some groups, including the Muslim Brotherhood, claimed that prosecutors had threatened Abdallah with physical violence if he did not resign, an allegation that the Judges’ Club denied on Sunday evening.