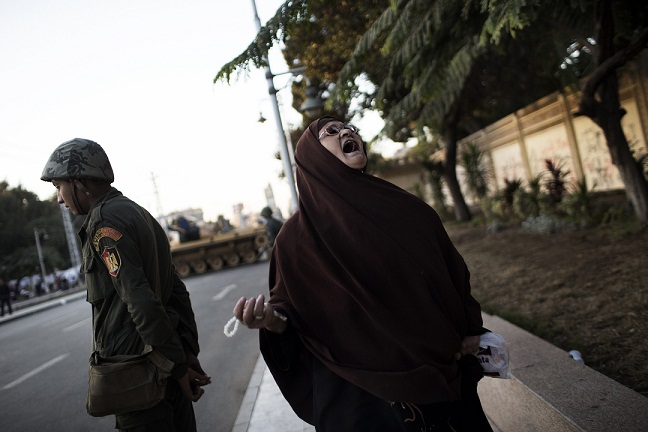 Only a handful of women showed up to Talaat Harb square in Downtown Cairo for a march to commemorate the anniversary of gender violence during the Cabinet clashes, immortalised in a photo of soldiers tearing off a woman’s abeya to reveal her blue bra as they beat her with batons and prepared to stamp on her bare stomach.

The Tuesday march was planned to finish at the site of the deadly fighting that raged for four days last December between protesters and the Egyptian military.

“It was clear after Maspero that the army was not pro-revolution and very involved in human rights violations,” said activist Maha Ma’moun in reference to the October 2011 killing of Coptic Christian protesters. The cabinet clashes drove that truth home to Egyptians and the photo of the ‘blue bra girl’ projected the message to the rest of the world.

“The army generals themselves had a press conference and they couldn’t answer the questions the reporters had about the blue bra image.” Ma’moun described how this inspired a woman’s march on 20 December 2011. “It was a huge march and it had a huge impact. SCAF released a statement apologising to Egyptian women.”

When asked if things had changed over the past year, Ma’moun could not help but let out a short laugh. “You are talking politically? I mean, they removed Article 36 [from the constitution], which was about the equality of men and women.”

Article 36 of the proposed constitution originally caused a storm when it was published in October for saying that women and men are equal as long as that equality remained in accordance with “Shari’a rulings.” Eventually the article was removed completely.

Manal Al-Tibi, one of the few women in the Constituent Assembly, resigned over the text concerning minorities and women. “Of course there are no rights for women,” Al-Tibi said of the current draft, “they don’t even talk about violence against women.”

“They were against protecting women trafficking,” Al-Tibi said of the public arguments over child marriage she engaged in with her Muslim Brotherhood and Salafi counterparts. “They said they want to allow a female child to be given away at nine years old by her father or guardian, and including protections against trafficking would prohibit that.”

The constitution now includes no reference to child marriage.

Sherweet Attya of the National Council for Women said Tuesday’s march is to voice the many layers of women’s discontent.

“The situation of women in Egypt in the last year has faced a sidelining of women’s agenda, a revoking of the women’s quota in parliament, and the rise of a conservative discourse advocating a reversal of women’s rights laws passed under the previous regime,” said Attya.

She went on to say that the new government must promise to ensure “the elimination of all forms of discrimination against women, securing women’s representation in political and judicial processes, guaranteeing their access to social and economic rights, and the establishment of a strong National Women’s Machinery to ensure that gender is mainstreamed in all government policies and to help establish a culture with no discrimination against women.”

On Tuesday on Talaat Harb Street, as she walked back toward the protests in Tahrir Square, Heba Mahmoud said that the low turnout for the women’s march did not reflect the volume of active women in Egypt. “It means absolutely nothing. I live nearby, so it was easy for me to come down. But I think most people are just worn out with all the protests in the last week, the last month, over the referendum.”

Women were taking part in wider marches against the constitution that are headed to the presidential palace. “Part of the march is about the young girl who was abused last year, but mainly it is about the constitution,” said Mona Mounir Rizk, the secretary general of the women’s committee within the Free Egyptian Party, who will be marching to the palace. “We’re against humiliation against anyone, whether it is by the Muslim Brotherhood, or the military, or anyone.”

Sabah El-Saqary, the head of the Freedom and Justice Party’s Women’s Secretariat  who also made a brief run at the leadership the FJP said: “For those who believe that women after the revolution have been marginalised, they have been proven wrong by the long lines of women voting for the referendum. These images show that women after the revolution are very much aware of politics in their county.

“When I talked to women in these lines, whether they were for or against the constitution, both camps told me why they accept or reject it, which shows how women are much more aware than before.”

El-Saqary dismissed critics who say woman are under-represented in the post-revolutionary parliament. She said this parliament was formed in a time of transition and was therefore not a good measure of the current level of female empowerment in Egyptian politics. She said that the next elections will see much more female representation because it will take place in what she called a “stable phase.”