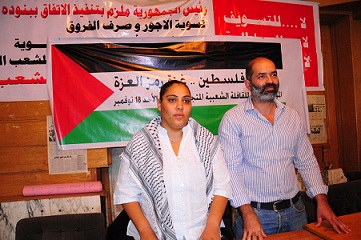 As the Israeli operation in Gaza continues, activists in Egypt plan to go to the besieged strip in a demonstration of solidarity.

This convoy does will not endorse any specific authority, it is intended to show support to the people of Palestine from the people of Egypt.

Lawyer Haytham Mohamedein said that the convoy’s demands include a lifting of the blockade on the Gaza Strip and the opening of the Rafah border crossing. They also want the “secret clauses” of the Camp David Accords published, as a precursor to their cancellation. He added that the convoy wants the end of all relations between Arab nations and Israel.

Most of the people taking part in the convoy are individuals who don’t belong to political groups but some of the participants are from Al-Dostour party, the Social Popular Alliance Party and the Arab Democratic Nasserist Party.  Political groups such as the Popular Current and the Revolutionary Socialists are also participating.  The programme of the convoy in Gaza is to hold a press conference and visit the injured in hospitals.

Many meetings have been held in Egypt regarding Gaza. Khaled Misha’al, head of Hamas, has arrived to discuss the situation. The Qatari head of state, Emir Khaled Bin Khalifa Al-Thani, as well as Turkish Prime Minister Recep Tayyip Erdogan arrived in Cairo on Saturday to discuss the deteriorating situation in Gaza.

Israel claims that the military operation targets terror sites and that in the past three days, the number of rockets fired into Israel total 410, in addition to over 200 which were intercepted by the Iron Dome missile defence system. So far the death toll on the Palestinian side is 39, including children and a pregnant woman. On the Israeli side, three have been killed.

According to The New York Times, Israel targeted the offices of Gaza’s Hamas Prime Minister Ismail Haniyeh overnight on Saturday as well as 200 other targets. Ma’an news agency reported that nine were killed in raids overnight, including three members of Hamas’s armed wing. The New York Times added that these strikes early Saturday were in response to rockets fired from Gaza which have reached Tel Aviv and Jerusalem. Rockets fired by armed groups in Gaza in the past have usually not reached as far as Tel Aviv.

The Tunisian Foreign Minister visited Gaza on Saturday and said that the attacks are against international law.

Prime Minister Hisham Qandil visited the strip on Friday and met the injured. He also spoke with Haniyeh.